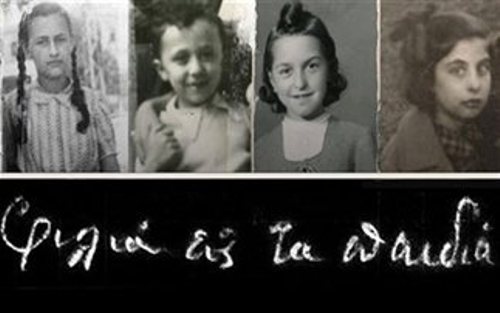 The permanent delegation of Greece to UNESCO participated in the events for the commemoration of the International Holocaust Remembrance Day, with the screening of Vassilis Loules’ film entitled “Kisses to the Children.”
The film is a moving testimony of three women and two men. The parents of all five died in Nazi concentration camps, however they themselves were rescued as young children thanks to the help of Christian families. The screening took place on Tuesday afternoon at 18.30, followed by a discussion hosted by historian Odette Varon-Vassard.
“We wanted to organize a Greek event because there were significant numbers of victims in Greece and especially in Thessaloniki where a powerful Hebraic community was exterminated,” explained Katherina Daskalaki, Permanent Representative of Greece to UNESCO.
Mrs. Daskalaki highlighted the obligation we have to remember the victims of the holocaust and the resistance we must show to the ideology of hatred despite its origin. “We built this program with great respect and emotion. We bow in front of the torment of millions of victims of brutality and we stand up for ourselves against any racist ideology of hatred which refers to one of the darkest pages in human history,” Mrs. Daskalaki continued.
Delegations from many other countries also attended the events.
For the Remembrance Day, UNESCO paid special attention to educational issues and organized discussions on matters concerning school books. They also organized a photographic exhibition in cooperation with the agency which manages the Holocaust Memorial in Paris, Memorial de la Shoah.