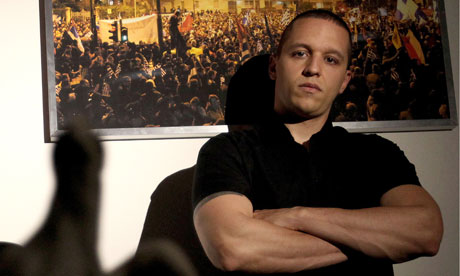 Ilias Kasidiaris, the spokesman for Greece’s neo-Nazi Golden Dawn party, facing charges along with other party leaders of running a criminal gang, told supporters that he will run for Mayor of Athens next year despite the government’s vow to dismantle his party.
If elected – and if not convicted and jailed – Kasidiaris said he would use deserted buildings in the capital, currently occupied by illegal immigrants, to house homeless Greeks. Golden Dawn, which wants all immigrants deported, has also been accused of beating them, which it also denies despite witness accounts.
Golden Dawn is running third in surveys that Prime Minister Antonis Samaras’ New Democracy Conservatives have slipped to second behind the major opposition Coalition of the Radical Left (SYRIZA) and with the Premier’s coalition partners, the PASOK Socialists, barely above the three percent threshold needed to win seats in Parliament.
Golden Dawn rose from obscurity in 2009 when it garnered only 0.29 percent of the vote to gain 18 seats in Parliament in the 2012 elections when it got 6.97 percent of the vote, a figure it doubled before the murder of an anti-fascist hip-hop artist in September, 2013 by a party member saw its popularity plummet before a recent rebound.
Golden Dawn ascended on the back of an anti-immigrant platform and its opposition to harsh austerity measures the government has imposed on the orders of international lenders, and also has a stated stance that is anti-Semitic, anti-gay, anti-Capitalist and has pushed for prosecutions for blasphemy.
“I will be a candidate for mayor of Athens, even from jail,”  Kasidiaris said at a gathering of party supporters at a central Athens hotel, according to the Reuters news agency. There haven’t been any polls that would show whether he would be a serious or fringe candidate for the position now held by Giorgos Kaminis, who is an Independent, and who was attacked by a Golden Dawn member, Giorgos Germenis, after prohibiting the party from distributing food to Greeks only.
Kaminis’ five-year term expires next year but he hasn’t said whether he will run for re-election. Germinis is among the six of the party’s 18 MPs who were arrested on the charges of being in a criminal gang and is being prosecuted for that charge.
Kasidiaris is also facing criminal charges in another unrelated case and is famous for slapping Communist MP Liana Kanelli on a live TV show.
Despite its extremist positions, Golden Dawn has managed to maintain a nuclear of hard-core supporters although its polling numbers show it would be unlikely to win the mayor’s office although some analysts have said the arrests of party leaders could backfire and build more support from people who feel aggrieved by austerity and disenfranchised.
Party officials have called the government’s prosecution a “parody.” Kasidiaris was released after being arrested although party leader Nikos Michaloliakos remains in detention. They all deny any wrongdoing and said they are victims of a political witch hunt to blunt their popularity although investigators said the extremists wanted to bring down the government.
Two opinion polls published in Sunday’s newspapers Proto Thema and Ethnos showed the party would get 8.9 to 10.3 percent of the vote, respectively, if elections were held now, ranking steadily in third place.
The same surveys by pollsters Alco and Metron Analysis showed the anti-bailout leftist opposition SYRIZA as the most popular single party, leading the conservatives in the ruling coalition by 0.7 to 1.2 percentage points. Parliamentary elections are due in 2016.