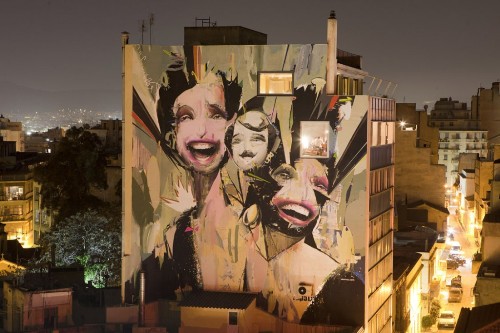 The work of some artists cannot be “restricted” to a gallery or placed in an exhibition.These pieces are made for a different purpose. Their creators use art to express their feelings. They were inspired by the “streets” and that is where they “gave birth” to Street Art.
In other words, this is how Street Art became a popular form of expression in cities all over the world. In Athens street art has had a slow start. In fact, the Greek economic crisis has led to a major increase in this form of public art in Greece. Intense social struggle, the harsh reality, the feeling of social injustice in Greece’s capital and the fact that many people are furious with the Greek government, has been a catalyst for many artists to begin expressing their feelings in this ways. This is when Street Art was born in Greece.
The Greek Reporter took a walk in central Athens and encountered five pieces of Street Art. 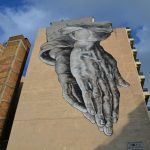 The Praying Hands on Peiraios Street
On the main and very crowded Peiraios Street near Omonoia Square, you can see the work of Pavlos Tsakonas. He was inspired by a piece by the sixteenth century German artist Albrecht Dürer. The work depicts praying hands and was created during a collaboration between the Ministry of Environment Energy & Climate Change, and the Athens School of Fine Arts. 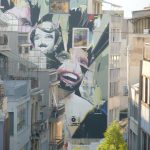 The Smiling Faces In Monastiraki
On the opposite side of Monastiraki Metro station, under the Acropolis, we observed for the first time the work of Alexandros Vasmoulakis. The piece is known for its expressive female faces with folding black hair and intense features. 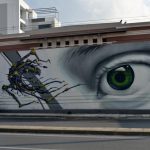 An Eye that Sees Imminent Danger, Texnopolis- Gazi
Our third piece of Street Art is that created by an alumnus of the Athens School of Fine Arts. On the wall of the Texnopolis building in Gazi, a human eye that observes an unknown machine and feels threatened by the machine’s existence and speed, was painted. “Access control” is a science fiction aesthetic that draws the eye of the passersby. 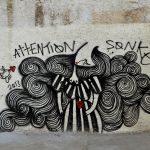 Graffiti from a Fairy Tale, Keramikos
Another street artist, Alekos Skoutariotis, has painted some peculiar creatures made up of indeterminate shapes in black and white with some red accents, which in some cases look like flowers and in others, like princesses from a fairy tale. These creations can be found on the walls of many streets in Athens. His astonishing paintings give something special to the area of Keramikos, in the shape of a woman, combining sadness with teenage innocence and giving a romantic touch to the city. 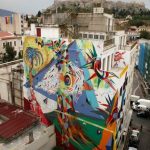 The Colorful Warrior, Monastiraki
Our fifth piece of Street Art is by Vangelis Choursoglou. Covering the wall of an old building in Monastiraki Metro station, it is called the Colorful Warrior. The same artist created the Colorful Tsunami, which students of the 64th Primary School of Athens have the opportunity to enjoy everyday. I wish all schools in the city center had such a view to excite the children’s imagination and inspire them to discover their own talents and ways of expression.