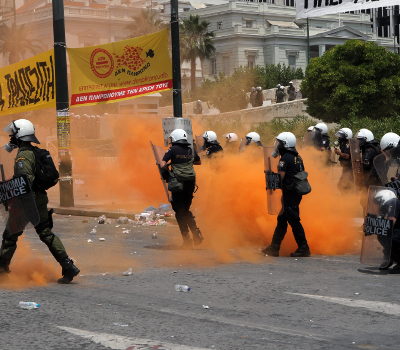 The German magazine Spiegel is advertising its new issue which is expected to include a revealing reportage on the armament programs in Greece. The title is indicative of the content “Everything on Greece’s briberies.”

At the same time, Süddeutsche Zeitung is congratulating the Greek female prosecutors who are carrying out investigations on cases of corruption and bribery.

The new issue focuses on the prosecutors Popi Papandreou, Evgenia Kyvelou and Eleni Siskou as well as on the General Prosecutor Eleni Raikou.

The German newspaper makes a reference to the Greek Postbank case, mentioning that if the prosecutor Popi Papandreou wishes to send someone to prison, “she’s determined to write 100 pages in one night” in order to do so. In addition, the reportage mentions that the Act 4022 gave a new impetus to investigations on corruption cases.

According to Süddeutsche Zeitung, the new law has increased the prosecutors’ jurisdictions. In addition, if the defendant returns the money to the state, the law allows the prosecutor to promise a less harsh punishment in return.

“The law would not have been enacted if the crisis would not have continued for a fifth year now. According to inner sources, before 2009, such investigations were not very welcome. Besides, at that time, there was no social pressure because everyone had money,” is mentioned in the magazine’s issue.

What is more, Raikou and Papandreou do not descend from rich and elite families as it is common for Greek politicians. The magazine underlines that “their rise results from their knowledge and diligence.”