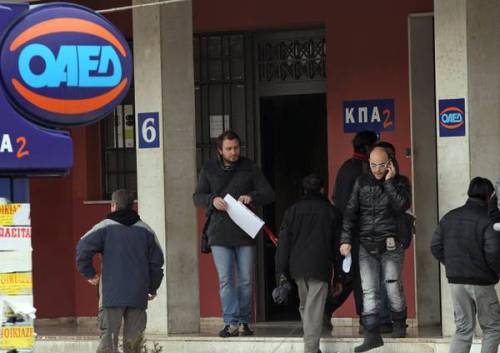 Centre of planning and Economic Research in Greece has proposed a controversial measure in order to deal with the problem of increasing unemployment in the country.
The measure includes unpaid work for the young and unemployed up to 24 years old, so that companies would have a strong motive to hire young employees. Practically, what is proposed is the abolition of the basic salary for a year. At the same time the “export” of young unemployed persons was also proposed to other countries abroad, as Greek businesses do not appear able to hire new personnel.
According to the National Confederation of Hellenic Commerce, unemployment especially hits the ages between 15-24. The unemployment rate in Greece stands at 24.6% while 57.2% of young people are without a job. The majority of the unemployed (71%) have had no work for 12 months or more, while 23.3 % of the total have never worked. There were 3,635,905 people employed and 1,345,387 unemployed.
Unemployment in Greece is one of the most pressing issues that the Greek government has to deal with. Its high rate is affecting Greek commerce as the numbers of those who are self-employed is constantly declining.