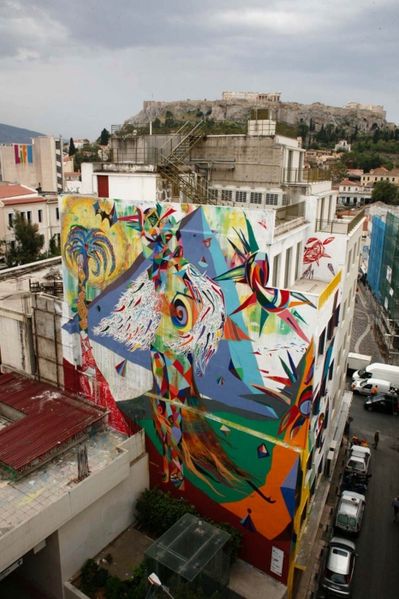 Every Saturday until the end of June 2014, thirty European and thirty Greek Street Artists ask us to meet them at Spata, Athens, to join them in drawing the Smart Park, industrial buildings, storehouses as well as other public areas in various municipalities of Athens. The event, starting on Saturday, January 25, will be accompanied by music and other street happenings.
The first activities will take place at Smart Park, within the frame of the interactive event “Le Mur Athens” (The Wall). During this event, the artists along with visitors will be drawing on a Bill Board of 2,000 x 4,000 meters.
On Saturday, January 25, the Greek artist LUNE 82 will “transform” his own wall within the frame of Le Mur Athens. LUNE 82 has been drawing graffiti since 1996. He is influenced by French, German and Austrian street art. His works are inspired by nature.
Various actions have yet to be announced for this multifaceted festival with the eloquent title Crisis [?] What Crisis [?] which, after last year’s success, is organized for the second time. Moreover, from March to June, 30 European artists are expected to visit Greece and in cooperation with 30 Greek artists draw more than 300 graffiti.
The festival will include activities in public places, artists exchanging views with the public, theoretical discussions about the meaning of art in times of crisis and issues arising from it, Stencil Workshop for children under the guidance of artists, street photography exhibition and work exhibition of the artists participating.
The festival aims to:
-show Greece, despite the crisis the country faces
-to highlight the difference between Street Artists who exercise social criticism through their signed works, opposed to the anarchy of anonymous complaints expressed through graffiti, which most of the time seem to pollute public buildings
-to examine the way in which artists nowadays respond to messages and symbols of an urban environment.
ATHENS STREET ART FESTIVAL is organized in collaboration with the Athens School of Fine Arts.