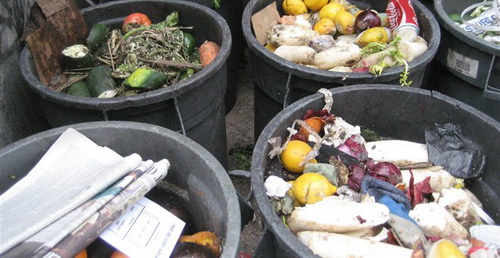 Despite the impact of the economic crisis on household budgets, four in ten Greeks admit to throwing away food at least once or twice a month, according to a new survey carried out by the WWF Greece conservation group.
The same survey found that 9 percent of Greeks throw away food twice or three times a week. Younger consumers aged between 18 and 34 throw away larger amounts of food than those aged over 55. However Greeks appear to be less wasteful than their European counterparts.
Products that most often end up in the trash include cooked leftovers, fruits and vegetables, dairy products, bread and pasta, along with those that have passed their sell-by-dates.
Although people understand the need to reduce waste, many still choose to ignore the advice. Shopping lists are not used in 20 percent of cases, while 17 percent of consumers admit to not eating leftovers. Only 8 percent of people said that they do their own composting of waste food.
According to Italian pasta manufacturer Barilla, Greeks each throw away around 44 kg of food per year, compared to 334 kg per year for Cypriots.
According to the WWF, the European average is estimated to be 179 kg per year, or products worth around 590 euros.
According to the organization, 1.3 billion tons of food ends up in the trash worldwide. At the same time, 868 million people are suffering from food deprivation.