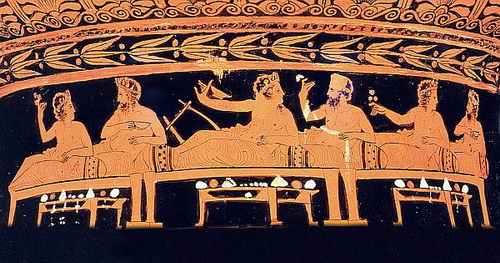 In 2008, more than 1.4 billion adults, aged 20 and older were overweight. In 2013, over 500 million of the world’s population was obese. By seeing these alarming numbers one could definitely argue that these people would benefit from a dose of self-control, as performed by ancient Greeks some thousand of years ago.
For the people of ancient Greece, fatness was the result of a lazy lifestyle and as proud people, ancients didn’t want to be associated with such a life. Quite a change there today!
For Socrates, who took a stern line on the problem, being obese was the result of not knowing what the right thing is. “If we knew,” he said, “we would not fail to do it, because it would have been so obviously in our interests to do it.” To the objection that a person often knew what was right but did not do it, in fear of e.g. losing pleasure, the ancient Greek philosopher replied that such a person didn’t really know what was right after all. The person simply had an opinion about it, which was prone to be perverted by passing whims. Hence the Socratic paradox according to which no one does wrong willingly, but only ignorantly. Therefore, curing ignorance is the only solution.
The doctor Hippocrates, well aware that sudden death was associated with obesity, knew that “dieting which causes excessive loss of weight, as well as the feeding-up of an emaciated person, is beset with difficulties.”
But none of this faced the real problem. As the ancient Athenian orator Demosthenes said, “There is no difficulty explaining what it is best thing to do, only in making you actually do it.” Elsewhere he said, that emotional reactions like anger and sexual infatuation made a person act against his best interests, as if his capacity to deliberate had been overwhelmed by some external god-like force. But this is understandable. After all, one cannot actively decide to become for example lustful and vice versa, even if one wanted to.
Only one thing is sure. Governments cannot implement strict rules regarding the control of one’s body weight. Therefore, the problem of obesity requires cognitive and moral as well as dietary fiber.