The Greek 'Moustaki': A mustache with history! 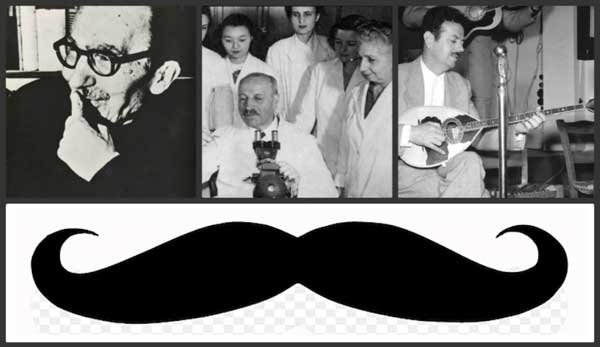 Men can change their style just by shaving. They wake up in the morning and depending on their mood, they can have a beard (long or short), a three-day stubble, sideburns (although old-fashioned), or a mustache. But for now, let’s stick to the latter…….
The mustache is in a sense part of Greek history. It may sound excessive, but anyone who searches the internet will soon realize, that many famous Greeks had a mustache. Revolution heroes, major politicians, prominent literary personalities and renowned scientists amongst others.
Not to mention famous Greek idioms and phrases such as “his mustaches are laughing”: which is used for someone who is extremely happy, or “we are going to eat our mustaches,” meaning, we are going to argue.
See below some famous Greeks with a mustache:

Nikos Kazantzakis: He was one of the greatest internationally renowned contemporary Greek writers. Nikos Kazantzakis (February 18, 1883 – October 26, 1957) became best known through the film adaptations of his works “Christ Recrucified,” “Zorba the Greek” and “The Last Temptation.” Nikos Kazantzakis is the most translated writer worldwide. His mustache was never large and impressive since he was a low- profile man.

Georgios Papanikolaou: He was a great scientist, doctor, biologist and researcher. Renowned for the Pap-test (Papanikolaou Test) which has saved the lives of many women suffering from cervical cancer and other cytologic diseases of the female reproductive system. Georgios Papanikolaou (May 13, 1883 – February 19, 1962) was honored with many awards. Among them included the “Medal of Honor” by the American Cancer Society in 1952. He was also depicted on a Greek drachma banknote. His mustache was a small, classic one.

Vasilis Tsitsanis: The mustache was a typical symbol for many Greek Rebetes (musicians of the Greek musical genre Rebetiko). Tsitsanis (Trikala, Greece, January 18, 1915 – London, UK, January 18, 1984) was one of the greatest Greek composers, lyricists and singers of the 20th century.

Eleftherios Venizelos: He also had a beard, but his mustache was particularly special as it was illustrating his strong and dynamic personality. Eleftherios Venizelos (Mournies, Chania, Greece, August 23, 1864 – Paris, France, March 18, 1936) was a Greek politician who served as Prime Minister of the Cretan State and seven times as Prime Minister of Greece. He was renowned for his reforms in almost all sectors of the Greek state and responsible for organizing the country according to urban standards. As a politician, he played an important role in the “Cretan Question” and Greece’s politics from 1910 until his death.

Theodoros Kolokotronis: Theodoros Kolokotronis (April 3, 1770 – February 4, 1843) was commander-in-chief and leader of the Greek Revolution of 1821, as well as a politician and consultant. He was renowned as “O Geros tou Moria” (The Old Man of Morea) and wore a truly impressive mustache.
(Edited by Evgenia Adamantopoulou)