Stournaras to Visit Australia in February 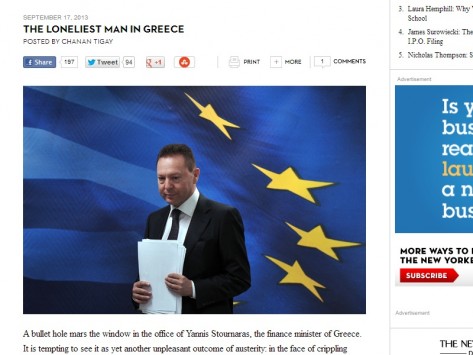 The Greek Minister of Finances, Yiannis Stournaras is expected to visit Sydney from February 20 to February 22, in order to attend the council of the G20 Finance Ministers and Central Bank Governors.

Meanwhile, the Australian Prime Minister, Tony Abbott is currently in Davos, Switzerland to participate in a meeting with leaders of the most powerful countries of the world. Abbott is aiming to discuss and promote Australia’s priorities before the G20 summit that will be held in Brisbane in next November.

Australia wants to promote the extension of the agreement on free trade and the upgrading of the tax system in order to tackle the widespread phenomenon of tax evasion that affects all countries and the improvement of the global financial system in order to avoid a similar financial crisis like the one that hit global economy in 2008.

This is the first opportunity of  the Australian Prime Minister to meet with the powerful leaders of the world, to talk about the Australian agenda and to promote the country’s major political issues.