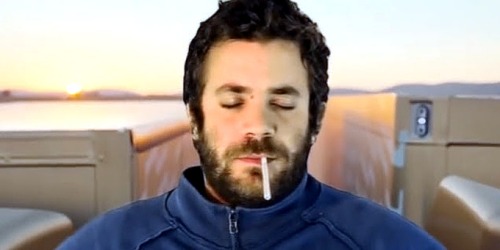 Most of us use the internet and social media to keep in touch with friends and family, meet new people, read the news and stay informed. However, some others are using the power of the internet and specifically youtube to try out their talent in comedy, music, acting and performing in general.  Most videos on youtube stay relatively unpopular, but in some cases everyday people became famous, as in the case of seven young Greeks.
[youtube]iRg8M0vQ8f4[/youtube]
Alexandros Kontopidis or Ponzi, as is his web nickname, has no taboos. Through his videos on YouTube the Greek Ponzi reads sarcastic love letters that are addressed to famous Greek TV hostesses or to famous Greek personalities such as Mikis Theodorakis.
[youtube]WTVCDK2pY2o[/youtube]
The Greek singer Pantelis Pantelidis became popular among Greeks through his videos that he uploaded on YouTube. In the homemade videos, Pantelidis sings his songs while playing the guitar. Views of his videos has exceed 1 million, leading to a contract with a record company. Soon after, Pantelidis won the title of best debut singer at Mad Music Awards. Pantelidis’ second album was released in Autumn 2013.
[youtube]Htm8Gb5gNQA[/youtube]
Monica Christodoulou is one of the young artists who try hard for many years to become famous, eventually reaching their goal through the internet. Initially through MySpace, she managed to connect with circles of “alternative” musicians. It was there that she found a way to upload her first videoclip on youtube, receiving about 3 million views. She now has two albums to her name.
[youtube]euzuBq_ppD4[/youtube]
Mikeius was first introduced to the web in 2009 with a blog entitled “FaeEnanMalaka.” In his blog, he criticized everything and everybody in a rather sarcastic way. After one of his texts caught Comedylab’s eye, a platform which gathers stand-up comedians, Mikeius earned the chance to create an online show on youtube entitled “Mpraf”. Today Mikeius has millions of views and thousands of comments on his youtube channel. He also managed to gather together thousands of Athenians in Thisio for a joint “harlem shake.”
[youtube]9wac1aGsYY0[/youtube]
The next young man to become famous is called Cain. In summer 2012, Cain asked Mega Channel to include once more the show “Retire” in its program. A year later, Mega agreed and asked Cain to take part in the show’s trailer. ComedyLab contacted him and he is now a member of their team.
[youtube]TCz7e-TvN2M[/youtube]
SoTiris is next. The expat from the U.S. decided to make a new version of 50 Cent’s songs, promoting at the same time Greek Feta cheese. A year later, he visited Greece and made a new video entitled “I’m in Greece.”
[youtube]yCiuGoNeoe0[/youtube]
Last but not least, the makeup guy. He used to upload videos on Youtube advising everyone from a working mother to a dead man, on how to apply makeup. “Mr. Make up,” or “GlamournessMyGod,” speaks English with a noticeable Greek accent and became known through his humorous videos. What we don’t know about him is that he really is a makeup artist, named Vasilis Theotokis.

One of the most recognizable figures of antiquity, the Sphinx, took many forms in the civilizations of Greece, the Near East and Asia.
Diaspora