Greece: It Takes Nine Months to Find a Job! 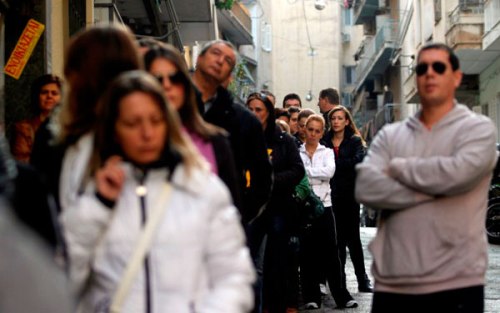 The average waiting time before finding a job in Greece has increased to more than nine months, surpassing not only Spain but also South Africa. This is what the International Labour Organisation (ILO) highlighted in its annual report released yesterday, detailing tendencies in the international employment arena for 2014.
This increase in waiting time has been a feature of the global economic difficulties which began in 2008. However it seems that the problem in Greece is much more persistent. For example in the U.S., the average waiting time for a job increased from 3-4 months to six in 2012. In Spain, it increased from five months in 2008, to eight in 2012. In Greece, where average waiting times have always been longer, it increased from eight to nine months compared to 2009.
According to the report, re-balancing of macroeconomic policies and an increase of labor income will significantly improve the prospects of employment. Indeed, according to the report, especially for the G20 countries, “a similar adjustment could reduce unemployment by 1.8 percent, which corresponds to 6.1 million additional job positions.”
However, it is also highlighted in the report that “if the current tendencies persist, global unemployment will expand, resulting in an increase of the numbers of unemployed to 215 million by 2018.” Analysts estimate that global unemployment rates will remain high for the next five years, while the numbers of young people unemployed will be 1 million more than pre-crisis levels.
In 2013, there were 5 million more unemployed people globally than there were in 2012. The total number of unemployed stood at 202 million. About 45 percent of these are in south and eastern Asia, sub-Saharan Africa and Europe. In contrast, Latin America had only 50,000 unemployed, less than 1 percent of the overall total.