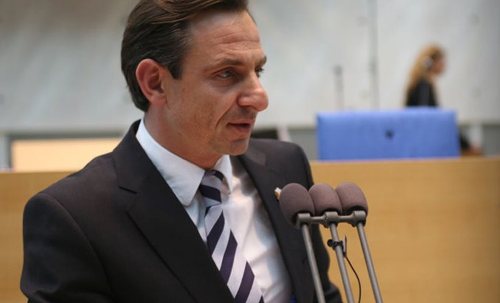 Georgios Chatzimarkakis (born 21 April 1966 in Duisburg) is a German politician of Greek descent, Member of the European Parliament with the Free Democratic Party of Germany (part of the Alliance of Liberals and Democrats for Europe). Chatzimarkakis wants to create a pro-European Union Citizens’ Movement that will participate in the forthcoming European elections.

The principles and the name of the new political party will be unveiled officially on Thursday, January 23. The event will take place at the office of the European Parliament in Athens.

Mr Chatzimarkakis stated on Friday during a session of the European Parliament that the protection from foreclosure of a citizen’s primary residence in Greece is a major political issue which should be of concern to all other member countries of the European Union. He added, “in Greece the primary residence has been secured only for this year. In other words Greek citizens with unpaid loans will not lose their homes within 2014.”

He also said that the efforts to help homeless people in the countries that have suffered from the economic crisis such as Greece, is a really positive measure.

However, Chatzimarkakis also warned that, “thousands of Greeks could lose their homes unless something is changed. How can they possibly pay their debts to the banks, when wages and pensions etc have been falling for so many years? This a major political issue,” he said.

He continued in his address to the plenary session of the European Parliament, “the issue of the protection of primary residences is one of the major problems that is lying ahead and we must take measures to ensure that no-one in Greece will lose his or her home until the country has recovered economically from the crisis and citizens are once again able to repay their loans to the banks.”

The holiday bookings of British nationals to Greece for 2021 have risen recently by a stunning 96 percent, travel agency Skyscanner has confirmed.
Charity