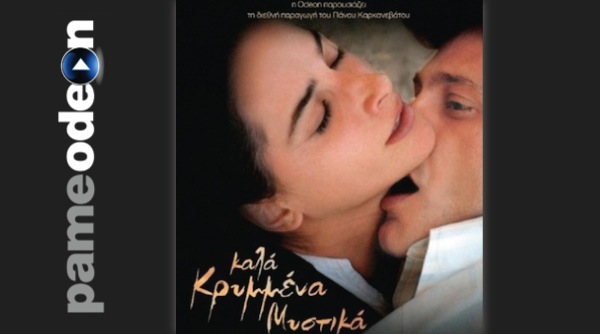 This Friday we invite you to unlock some “Well Kept Secrets.” The Greek drama by Panos Karkanevatos tells a powerful story about love that takes place in two different time periods.

The Greek leading film distributor and producer, Odeon S.A., and Greek Reporter have teamed up to promote Greek cinema to a new worldwide audience, through PameOdeon.gr, the new video on demand platform that lets you stream hundreds of Greek movies legally. If you want to show your support to Greek filmmakers watch their movies on PameOdeon.gr.

“Well Kept Secrets” is an international co-production (Greece, Canada, USA, Holland, Belgium, Luxembourg), with an international cast that was shot on the Greek island Nisyros and New York.
The film was nominated for the YPPO awards and was part of the Montreal Film Festival with an exceptional response from the audience and the international press.
The story begins 30 years ago on a secluded island in the Aegean Sea, haunted by the beauty of the wild landscape and of the people who resided there.
In the present, a young Greek-American woman begins a journey from New York, returning to her mother’s “secret” past. She is looking for her roots and the father she never met. In a harsh matriarchal society of the past, the young Athanasia will struggle to find a place in life and love. The unwritten law of society though, was stronger! Athanasia will suffer the consequences and will leave forever…
Director: Panos Karkanevatos
Writer: Panos Karkanevatos
Actors: Marina Kalogirou, Giorgos Karamihos, Vaggelis Mourikis
Country Produced: Greece
Category: Romantic Drama, Drama
Year released: 2010
Follow the steps below to watch the film:
PameOdeon.gr makes it easy to watch your favorite films with 5 easy steps: