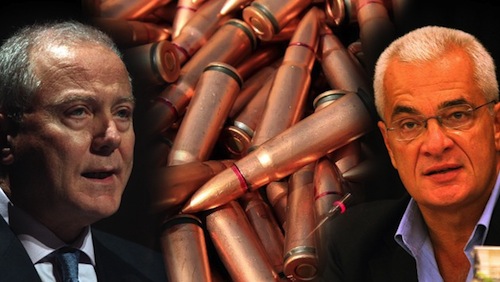 A day after Bank of Greece Governor Giorgos Provopoulos told a parliamentary committee that the economy is recovering but that the country’s banks may need more money, authorities said he and TV presenter Yiannis Pretenderis received envelopes containing bullets, prompting calls to counter-terrorism police.
The envelope sent to Provopoulos was spotted by security guards before it was sent to his office. The bullets were traced by a metal detector that checks all incoming mail, according to unnamed sources who told Kathimerini they were to be examined by police forensics experts.
The incident came a day after Provopoulos said that certain Greek banks may need some additional capital once the stress tests conducted by BlackRock Solutions are published.
He had also called on politicians to unite behind reforms including austerity to prevent unrest ahead of the critical May elections for the European Parliament and Greek municipalities, saying only that could upend the likelihood of Greece making an unlikely comeback from a crushing economic crisis that has created record unemployment and poverty.
In February last year, Finance Minister Yannis Stournaras received a single bullet in an envelope containing a threatening note. A group called Cretan Revolution later claimed responsibility for sending the envelope in a protest against tax increases.
Later in the day, a previously unknown group calling itself Popular Avengers claimed responsibility for sending two separate envelopes containing the bullets.
In both cases, the letters were stopped by metal detectors before reaching the offices of the recipients. Each envelope contained two 7.62 millimeter bullets and a short threatening note, the sources said.
The envelopes were collected by members of the police’s anti-terrorism unit which forwarded the bullets for inspection by forensics experts.
Reports said both notes were signed by the group Popular Avengers and condemn Provopoulos’ relationship with bankers and the stance of Pretenderis which they describe as “pro-memorandum,” meaning supporting the government’s imposing of harsh austerity measures demanded by international lenders.