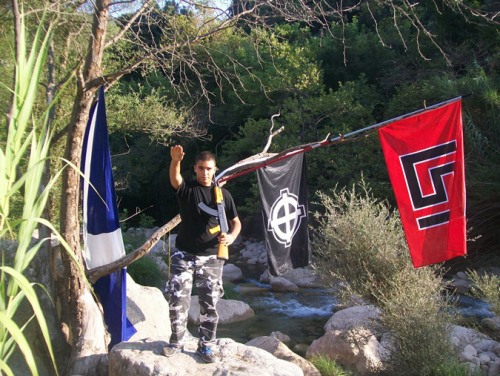 New evidence delivered by the Hellenic Police Forensic Science Division, will add more elements strengthening the case against the paramilitary organization of Golden Dawn. The evidence is to be delivered to the coroner handling the Greek party’s case.
Photos found on Giorgos Patelis’ personal computer, show other subordinates of Golden Dawn holding guns – something that up to this moment was only proven for Elias Kasidiaris.
According to sources, these photos are from a Golden Dawn camp at the Neda river waterfalls, southern Greece. The photos show the party’s members holding revolvers or machine guns, standing in front of Greek and swastika flags.
At the same time, information was brought forth regarding Greek police’s reaction on the night of Pavlos Fyssas’ murder.
As it appears, policemen were standing as plain spectators at the site of the murder as they were informed by members of Golden Dawn that they were only fighting with some anarchists. “We were standing nearby when twenty Golden Dawn members informed us that they had a dispute with some anarchists. We were trying to ease things out. However, you should know that as far as we could see, they were hitting people with the back of the gun…” DIAS unit reported to the Hellenic Police’s Emergency Centre. The answer was clear: “Keep a distance so that you can give the Hellenic Police Centre your report.”
The DIAS unit asked for backup at least four more times with no answer. Five minutes after midnight the DIAS unit reported the stabbing. The unit communicated, “There is a man who has been stabbed, probably with a knife. He seems to have been stabbed in the heart. There are two other men on the spot.” They immediately called an ambulance which took 25 minutes to arrive on scene.