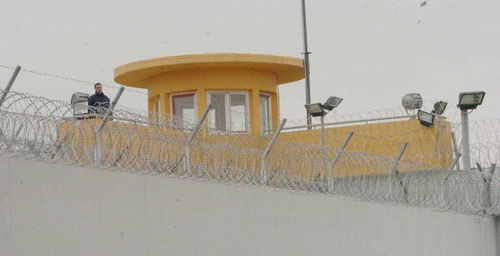 Τhe escape of Christodoulos Xeros last week has led to Justice Minister, Charalambos Athanassiou announcing the creation of a maximum security prison within 100 days, for housing those convicted on terrorism charges as well as other serious criminal offenses.
The new prison is to be created at the Regional Penitentiary of Domokos in Central Greece. According to the plan, the prison will be fitted with state of the art digital surveillance, electronic countermeasures and bulletproof windows, while armed guards from the Greek military and the Special Anti-Terrorist Unit (EKAM) will patrol the grounds outside.
Today the mayor of Domokos, retired Police Lieutenant General Stylianos Syros, stated in an interview that the new prison is unlikely to live up to expectations. The high-ranking retired police officer was involved in the arrest of November 17 members back in 2002.
“Domokos is located 40km west of the city of Lamia. The area is known for its poor weather conditions and long winter with fog and snow, as well as bad roads. In order to convert the prison of Domokos into a maximum security facility, some “correctional adjustments need to be made, if I can say it like this,” said the Mayor during his interview. “The detention officers must be both hand-picked and very capable as well as very well-trained, because possessing just one of these three qualities is not enough for such a facility.”
The mayor also made reference to prison infrastructure, noting that prisoner transport vehicles should be stationed in an enclosed and secure place and not on the road beside the prison, as they are today. Local water supplies are also limited and won’t be enough for the prison and the town. There is also the issue of the health of the prisoners, with the prison hospital not working properly and with a single physician. In case of a medical emergency, the inmate will need to be transferred to the public hospital in Lamia, leaving the prison with less officers.

Greece Says Turkey is Safe for Migrants from Five Countries