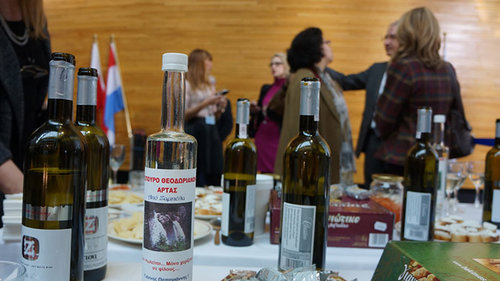 A special event to honor and support rural regions of Greece which despite their difficulties and the economic crisis, still produce an innovative range of products, was organized by the German and Belgian MEP’s, Jo Leinen and Marc Tarabella.

Greek delicacies and traditional products from Epirus and the Achelous valley were offered to members and employees of the European Parliament in Strasbourg, during the presentation of the priorities of the Greek presidency. The MEPs had chosen to support these two Greek regions as they are amongst the poorest in the country.

The event was attended by foreign MEPs, executives and employees of European institutions, along with journalists. They had the opportunity to taste local foods such as feta and gruyere cheese, raki and the famous Greek pastry Gianniotikos baklavas. The audience was told that in rural regions of Greece, people are continually coming up with new and innovative ways to produce and promote local products. In so doing they hope to earn the support of European authorities and to participate in financial support programs for agricultural production.

The holiday bookings of British nationals to Greece for 2021 have risen recently by a stunning 96 percent, travel agency Skyscanner has confirmed.
Diplomacy