Smile of the Child Takes Custody of Maria 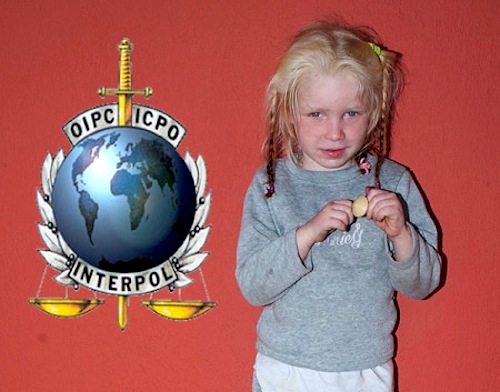 Maria is a young girl between the age of 5 and 6 that was found living with a Roma family in Farsala, Central Greece, in October 2013. She was found by a prosecutor who was investigating another police related case in the area. The prosecutor suspected that the Roma couple claiming to be the little girl’s parents were actually lying and notified the Greek police.
DNA tests showed that the couple was indeed lying and police started suspecting that the child had been the victim of child trafficking. With the help of other agencies they began a worldwide search for the girl’s biological parents, while she was put in the care of Greek charity organization Smile of the Child.
Police were finally able to locate Maria’s biological parents in another Roma camp in Bulgaria. When asked why their child was found in Greece, the couple replied that because of economic troubles, they couldn’t support their big family. They said they were trying to give the little girl a better life by giving her away to the couple in Greece.
Many questions were raised regarding what the next appropriate course of action should be in the case. Some said she should be returned to Bulgaria and to the child service system there, while others proposed she remain in Greece.
Finally, the Larissa Court ruled that the child should stay with the Greek organization Smile of the Child who will obtain full custodial rights.
Meanwhile, the Roma couple pretending to be her parents is in pretrial for document fraud and abduction of a minor. Their lawyer is arguing that the abduction charges have no ground seeing as the biological parents had given her away. Furthermore, the couple maintains that they had informally adopted the girl.