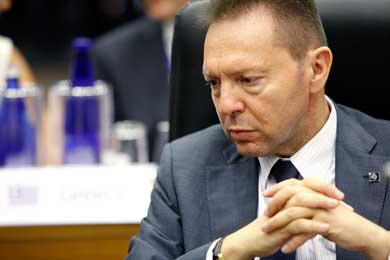 Greek Finance Minister Yannis Stournaras, dismissing reports he may be appointed the Governor of the Bank of Greece which has had trouble predicting the country’s fiscal fortune, told SKAI TV that he’s changed his mind about asking the country’s international lenders for debt relief because it could destabilize the Eurozone.
A previous government in 2011 stiffed investors with 74 percent losses – a so-called Private Sector Involvement (PSI) – and until now Stournaras and Prime Minister Antonis Samaras have said as Greece is going to have a primary surplus – minus many expenses such as interest – that it would ask the Troika of the European Union-International Monetary Fund-European Central Bank (EU-IMF-ECB) to take losses as well on the $325 billion Greece owes for two bailouts.
Stournaras said if Greece didn’t repay its loans that it’s likely it would be ejected from the Eurozone and unable to use the euro it adopted 13 years ago to replace the ancient drachma, a prospect Samaras had said would create chaos and catastrophe when he was explaining why he was imposing austerity measures on Troika orders.
Ironically, the PSI was implemented by then-finance chief Evangelos Venizelos, now the head of the PASOK Socialists who is serving as Deputy Premier/Foreign Minister in the coalition led by Samaras’ New Democracy Conservatives.
Stournaras said that, “The PSI is one thing, to damage the German, Austrian or the people of countries poorer than Greece with a haircut is another.” If Greece doesn’t repay its loans it would force taxpayers in the other 17 Eurozone countries to pick up the tab for generations of wild overspending by alternating New Democracy and PASOK administrations that hired hundreds of thousands of needless workers in return for votes.
He said, however, Greece would still like to talk about restructuring its debt, such as lower interest rates or taking a longer time to repay. The Troika has already ruled out a debt cut, particularly German Chancellor Angela Merkel, whose country is putting up much of the loan monies and is profiting handsomely, and who has insisted on big pay cuts, tax hikes and slashed pensions.
Stournaras, the champion cheerleader for Greece’s recovery which many analysts still doubt because they said they believe the debt is unsustainable, said that, “We have achieved 80% of what needs to be done, we have eradicated the cause of the crisis, we have a primary surplus and we eradicated the deficit in the trade balance.”
For all that, he said he would rather see the Troika return to Athens in February to continue negotiations on unresolved reforms and how to close a 2014 budget hole of as much as 1.4 billion euros so Greece can have economic data from December to press its case that it’s getting better.
He didn’t say what the means to the those suffering from record unemployment and deep poverty worsened by the austerity measures as Greece is now in the seventh year of a deep recession.
Stournaras said neither businesses, nor the Troika will insist upon the deregulation of mass firings and reiterated that 70 percent of the primary surplus will be distributed amongst the weaker social classes. He also again backed the Managing Consultant of the Financial Stability Fund Anastasia Sakellariou, who has been ensnared in a bank scandal that has been big Greek news.