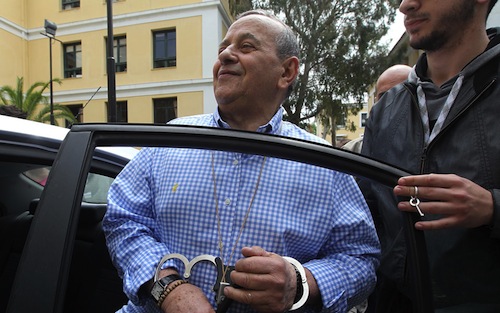 Greek publisher Giorgos Kouris was arrested by police for debts to the State and is now being held at the Greek police headquarters in Athens.
Four arrest warrants were issued against him, one for debts to the Social Security Organization, IKA, and three for debts to the Greek Tax Office.
On March 2013, publisher Giorgos Kouris and his son Andreas were imprisoned for the offense of failure to pay payroll taxes of the Greek TV channel ALTER, for the period dating February 1, 2011 to September 30, 2011, a total of 1.5 million.
In their plea, both defendants argued that they were not involved with the TV channels administration since they were not even in the board of directors. They both said that Kostas Giannikos was in charge of such decisions. Their claims however, failed to convince the investigating judge and the public prosecutor, who decided they should be detained.
Former publisher of the Greece ‘s newspaper “Avriani,” Giorgos Kouris, his son Andrew, former Vice President of ALTER, other legal representatives and major shareholders of the television channel, as well as the three companies associated with the channel are facing felony charges for issuing false and virtual invoices. Two court decisions have been made for Kouris, one convicting and one acquitting him for his debts to IKA.