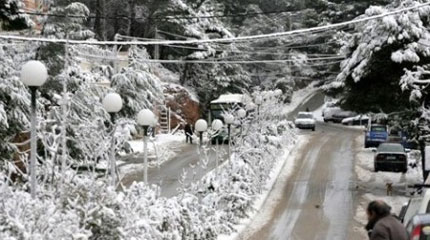 The association of hotel owners of Greece has proposed that the government establish an interim school holiday across the country so that Greek families have the opportunity to take a short vacation during the winter period.
According to the deputy chairman of the Panhellenic Federation of Hoteliers, Konstantinos Leventis, the proposal has already been accepted by the Ministry of Tourism. In fact  it was discussed during the recent meeting of representatives of the tourism sector with Antonis Samaras, after which the Prime Minister gave instructions for the measure to be put in place. In the next few days the Education Minister, Konstantinos Arvanitopoulos will meet with Greek hotel owners to discuss the implementation of the proposal.
The Panhellenic Federation of Hoteliers has proposed the closure of schools in Greece for four days, during the period March 3-7 which follows Clean Monday (Kathari Deftera). The hotel owners have highlighted that similar holidays apply in many European countries, especially in Northern Europe.
The Greek hoteliers are hoping to provide a boost for their sector which has been hit hard by the crisis. However many believe that the measure will not have much effect as Greeks have already dramatically reduced the amount they spend on holidays.