Greece on Red Alert for Destruction of Syrian Chemical Weapons 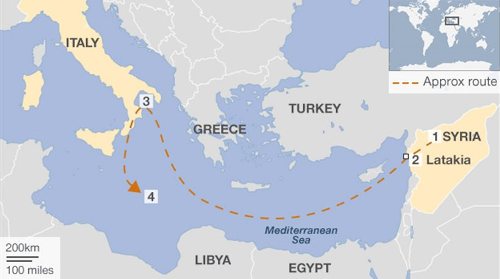 The campaign of dismantling the Syrian chemical weapons of Bashar al- Assad regime is underway, as it has been agreed between the U.S. and Russia. Ships from Denmark and Norway are transferring chemical weapons to an unknown destination in order to be dismantled. It is believed that the majority of those chemical weapons will be destroyed in special facilities in Germany.
Greece is on red alert because the most dangerous and deadly chemical weapons of Assad’s regime are scheduled to be destroyed in the territorial sea between Malta, Libya and Crete. The procedure of neutralizing the approximately 20 tones of Mustard gas that Assad had at his disposal, is considered as the most crucial one. The American cargo ship “MV Cape Ray” is geared up to destroy Syrian’s deadly arsenal of mustard gas.
There are many locals from the Greek island who oppose to this procedure. In particular, they express their concerns towards the hydrolysis procedure that must be followed in order to neutralize the Syrian chemical weapons as it will be hazardous for the marine habitat of Crete. However U.S. officials reassure those who are opposed to the dismantling procedure, that the marine habitat will remain unharmed.
Partners of Evangelos Venizelos have underlined that the Greek Ministry of Foreign affairs have already taken initiatives on a diplomatic level, in order to prevent any environmental damage on the territorial sea of the Mediterranean by the dismantling of the chemical arsenal of Bashar al-Assad.