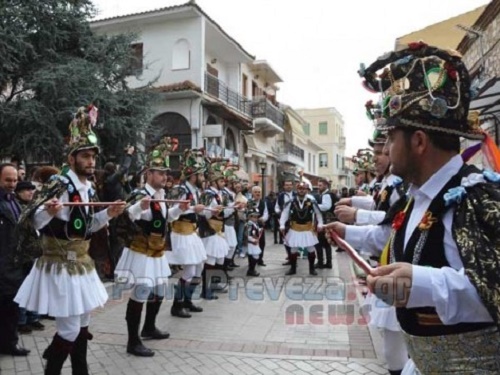 The streets of Preveza were filled with laughter, satirical skits, teasing and dancing this Saturday, January 11, impressing the hundreds of people who attended the Greek custom Momogeri.
The event began with a meeting in Theofaneio followed by a performance in the historic narrow streets of the city center.
Momogeri is an old genuine form of Greek traditional folk theater, the most ancient ritual revived today in Greece.
The Greeks of Pontus preserved the custom of Momogeri for centuries. After the Asia Minor catastrophe of 1922 and the exchange of populations, they carried over the tradition to Greece, along with the language, folk music, dances and other customs.
The name Momogeri derives from the composition of the words “momos” and “geros.” Momos was the God of Laughter and Satyr in ancient times. He was the personification of censure and condemnation.
The word “geros” refers to the old connoisseurs of mystical ceremonies, the “priests” of the time.
There are many people involved in this custom and they are divided in two groups, theater and dance. The theater element involves people dressed as: two brides, an old man with his wife, a gypsy with a bear, a Doctor, a Policeman, and the Devil. The dance element consists of a Leader and twelve dancers.
The actors consciously seek to entertain, bring happiness and of course to be treated by the hosts of the houses they visit.
This custom is a way to welcome the New Year, but most of all it is a way to entertain. It is a Greek traditional street theater of the people who aim to spread cheer, joy and laughter.