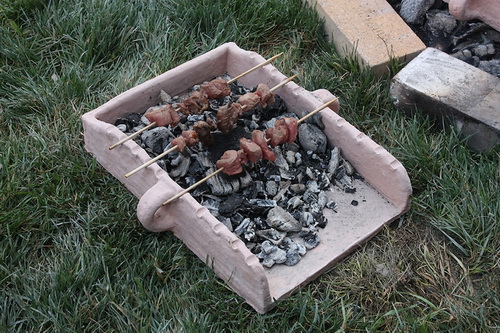 New scientific research reveals that the ancient Mycenaean’s, apart from being great warriors and excellent architects, were also very good cooks. More than 3,000 years ago this ancient civilization was using portable grilling trays for making souvlaki and non-stick pans for baking bread.
The Mycenaean civilization thrived during the late Bronze Age from around 1,600 BC to 1,100 BC, at sites such as Mycenae in the Argolid in the Peloponnese, Greece. They were referred to in Homer’s epics, the Odyssey and Iliad, and they left behind many elaborate palaces and tombs containing precious artifacts and important historic evidence. Some of the items discovered were simpler though, like souvlaki trays and griddles made from clay.
“It wasn’t clear how these two types of pans were used,” said Julie Hruby of Dartmouth College, presenting her research at the Archaeological Institute of America’s annual meeting.
“We don’t have any recipes,” said Hruby during an interview and reported on the website LiveScience. “What we do have are tablets that mention provisions for feasts, so we have some idea of what the ingredients might have been, but in terms of understanding how people cooked, the cooking pots are really our best bet.”
The souvlaki trays are made of clay and support the skewers of meat between raised parallel edges. Until recently it was not clear if the whole tray was placed directly over the fire, or whether the tray itself held the hot coals; a sort of pre-historic portable BBQ. On the other hand, the round griddles had a smooth side, while the other was covered with tiny holes, which caused some confusion among archaeologists as to its use.
In order to investigate how these trays may have been used, Hruby replicated with the help of a ceramist, two examples and tested them to see if they could be used to cook meat and bake bread. The results were impressive.
It was found that the clay was too thick for the souvlaki to cook properly when the tray was placed over a fire. Placing the coals inside the tray was a much more effective cooking method.
“We should probably envision these as portable cooking devices – perhaps used during Mycenaean picnics,” said the archaeologist.
As for the griddles, bread was more likely to stick when it was cooked on the smooth side of the pan. The holes would appear to be an ancient non-stick technology, ensuring that oil spread evenly over the griddle.
During excavations at Mycenaean sites in the early 20th century, cooking pots were often overlooked or even thrown out. Today researchers are starting to pay more attention to these types of archaeological finds, in order to get a more complete picture of life during the Bronze Age.
For the full article and more pictures, visit LiveScience.