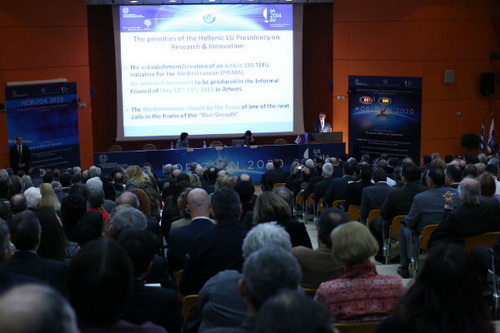 The research and technology program “Horizon 2020,” a new European program worth up to €80 billion was launched earlier today at the Greek National Center for Scientific Research “Demokritos” by the President of the Greek Republic Karolos Papoulias.

The program, whose budget is increased by 30% compared to an earlier initiative, includes new tools for supporting and financing small and medium businesses, facilitating mobility of researchers and encouraging the creation of future and emerging technologies.

Greek Minister of Education and Religious Affairs, Konstantinos Arvanitopoulos, announced that a new bill on research, technological development and innovation, as well as linking research to production and entrepreneurship, will be tabled before parliament in the next few weeks.

“Greece can gain a competitive advantage in research, technology and innovation. By keeping our researchers in our country and attracting new ones, we will strengthen Greek research potential and reach by 2020 our “Greece of Innovation goal,” said the Minister.

In her statement, European Commissioner for Research, Innovation and Science, Máire Geoghegan-Quinn, underlined that research and innovation equals growth and jobs. She noted however, that Europe must devote even more resources in this direction and made a special reference to the fact that Greece ranks 9th in absorbing EU funds.

Christos Vasilakos, Secretary-General for Research and Technology, presented the priorities for the Greek Presidency in the fields of research and technology and said that the country will meet the targets set, while highlighting as well that one of the side effects of the crisis is that researchers are leaving Greece.