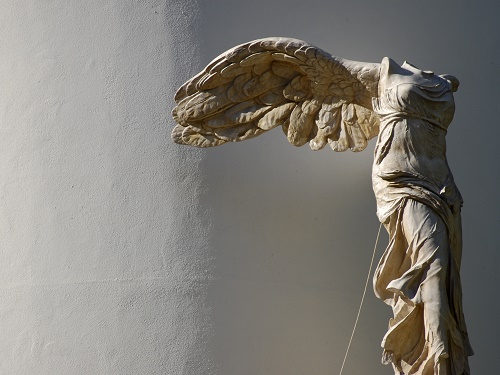 According to an announcement by the Louvre Museum, it has managed to collect one million euros from private donations to restore one of its most famous exhibits, the Winged Victory of Samothrace, according to the news agency AFP.

Approximately 6,700 individuals participated in the “Everybody Can Be Maecenas” campaign which began four months ago, according to the French museum. To fund the ambitious restoration project, the Louvre had set itself the goal to collect one million euros from September 3 to December 31 2013, through private contributions, with a total estimated budget for the project of four million euros. The remaining three million will be generated through sponsorship.

The contributions varied from 1 to 8,500 euros. The average was 134 euros and the most frequent amount given was 50 euros. The museum also said that people from other countries, especially Japan contributed to the fund.

The famous Greek statue of the Winged Victory, which is now under restoration in a neighboring room will regain its place at the top of the main staircase, or Daru Staircase in early summer 2014. According to the museum the staircase renovation will not be complete before March 2015.

The Museums of France Center for Research and Restoration have managed to detect subtle traces of blue paint, invisible to the naked eye. “These traces allow us to say that the statue was colorful, at least in part,” said a museum official. Work on the statue also revealed a curled lock of hair behind the neck, which was hidden beneath a modern (20th century) piece of plaster.