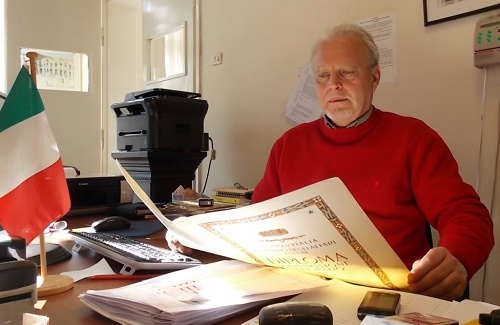 According to the Jewish Telegraphic Agency (JTA), 157 graduation certificates were found in a school in Greece. The students who were to receive them had either fled the country during the Holocaust or been sent to Nazi concentration camps. The teacher who made the discovery decided to find the survivors or their remaining family members, and to give them the certificates even after all these years.
The documents were discovered by Antonio Crescenzi, a teacher at the Italian School in Thessaloniki, Greece, some ten years ago. After realizing what the documents were, he notified the Israeli newspaper Maariv.
Thesslaoniki used to be the home of a large Jewish community during the pre-war era. However most were forced to leave or were sent to Nazis concentration camps. Out of the 55,000 Jewish residents only 2,000 survived.
The documents discovered relate to students born between 1912 and 1928 who attended the Italian School of Thessaloniki. Crescenzi has managed to contact some of the students or their surviving family members. The graduation certificates will be awarded during a special ceremony scheduled for 2014.