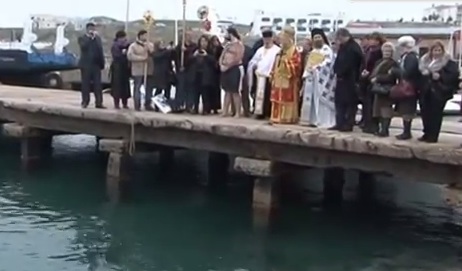 The few Greeks that still live on Tenedos and in Smyrni, Turkey, celebrated the Epiphany Feast yesterday with a glorious ceremony. On the eve of the Epiphany, the first blessing was held on Tenedos and then the small number of Christian Greeks on the island cut the Vasilopita.

The procession began from the harbor where the immersion of the Holy Cross took place.

After the immersion, his eminence the Metropolitan Cyril of Imvros and Tenedos, blessed all those who came to the island to attend the ceremony on this historic day.

The president of the Greek minority on Tenedos also thanked all those who visited the island and underlined that their presence on this day was a boost for the local society.