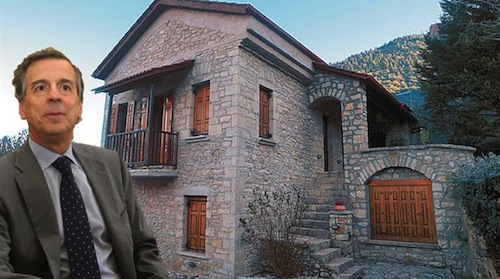 The arrest of the Greek former minister Michalis Liapis that took place after he was caught driving a luxurious car with fake plates was just the first of many scandals in which Liapis is involved.
According to an article published on Saturday by “Ethnos,” the cottage of the former minister (a luxury home in Evritania), was renovated with community funds. Initially the house was scheduled to operate as a hostel. However Giorgos Kirtsos, a famous Greek journalist revealed that the house is exclusively used by the Liapis family.
The article states that the funding was approved by the company EVRITANIA S.A and the authorization was allegedly signed by the then Prefect and current member of New Democracy, Konstantinos Kontogeorgos. Kontogeorgos has already been prosecuted for disloyalty as there are complaints that he illegally provided a guarantee to the company EVRITANIA S.A in order to take a loan of 4.7 million euros from the Loans and Deposits Fund.
The Greek TV station “Alpha” presented a document in which Michalis Liapis’ aunt submitted a request from EOT (Tourism Organisation in Greece) in June, 21, 1995, to start operations for the renovation of the house.
According to the former minister’s income declaration, the house is owned 50% by Michalis Liapis and as revealed by the TV station “Alpha,” in 2002 his family had requested the closure of the company that rented rooms, built with EU funds.