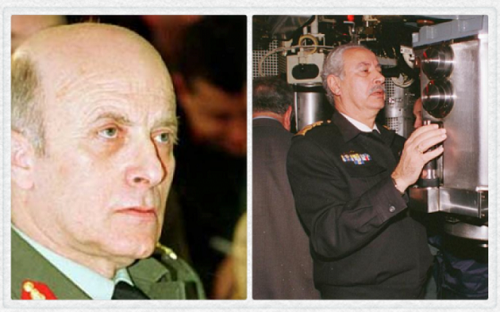 Greek businessman Panayiotis Efstathiou, a key suspect in the German arms bribery scandal testified today in front of the investigator. Leaks from his testimony have caused an uproar in the Armed Forces, with two former chiefs implicated in the case, deceased former Chief of the Hellenic Navy General Staff, Giorgos Theodoroulakis, and former Chief of the Hellenic Army General Staff, Kostas Panayiotakis.
Kostas Panayiotakis was in office at the same time that Akis Tsochatzopoulos was a Minister, and retired without giving any reason, leaving his name above suspicion. All who served under him or knew him have been shocked by the accusations of Mr. Efstathiou. The case continues and many await the evidence he will provide.
Mr. Panagiotakis is described as a man who would not easily back down. In the case of the Suzana Arms from the Czech Republic he never gave in to the government’s insistence to make the purchase. Instead he sent them to Cyprus.
Mr. Efstathiou has implicated eight more Greek officials, claiming that they also received bribes for the purchase of equipment.