Syrian Refugees Having a Hard Time In Greece 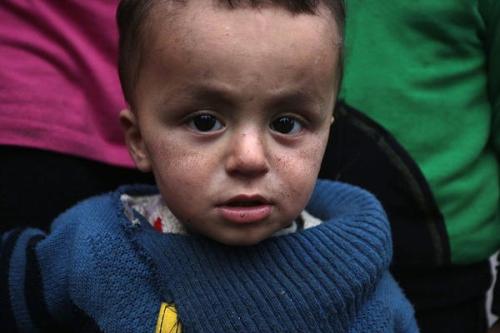 As the civil war in Syria gets worse day by day, the number of refugees who seek better luck has been constantly increasing. The host countries in Europe and the Middle East have grown uneasy over the new arrivals. Greece is the main and easiest access for Syrian refugees to reach Europe.
But as Greece enters its seventh year of recession, and as Greek society is reeling from painful cuts and strict measures, the phenomenon of xenophobia is rising. Indicative of this situation is that the Greek neo-Nazi party is the third most popular party in Greece according to opinion polls, while attacks on immigrants and refugees become more and more common every day.
Many incidents showing that xenophobic behaviors and racist attitudes have infiltrated to the Greek Police authorities came to light by the Greek magazine, Hot Doc last week. The Greek Chief of Police advised officers that undocumented immigrants should be detained for as long as possible, and their “lives must be made unbearable.” The alleged comments were made during a meeting of police officials, as reported Hot Doc magazine. The police chief is alleged to have said, “If they told me I could go to a country…and would be detained for three months and then would be free to steal and rob, to do whatever you want…that is great.”
He continued, “We aim to increase the detention period…we increased it to eighteen months…for what purpose? We must make their lives unbearable…”
Hot Doc magazine also included an audio of the comments by the police chief.
These comments may shock the public, but they have not appeared out of the blue. For years, human right groups and NGOs have criticized the way that Greek authorities have been treating refugees and immigrants. Moreover, the European Court of Human Rights has condemned Greece on several occasions for mistreating refugees or immigrants. The most recent of these occasions was the decision that was taken by the European Court of Human Rights to condemn Greece for mistreating and illegally deporting a political refugee from Iran and for illegally jailing and mistreating another 13 asylum seekers from various countries that entered through Turkey. The court ordered Greece to pay 8,000 euros ($10,960) to the Iranian deportee and between 5,000 ($6,850) and 10,000 euros ($13,700) to each of the 13 asylum seekers.
Greece was among the countries that signed the UN Convention on Refugees in 1956. With this signature, Greece had the obligation to protect and to recognize refugees and asylum seekers. Since last summer, all Syrian refugees who left their homeland due to the ongoing war and managed to get to Greece, have been automatically granted a 6-month permit that can be renewed.
However, those who make it to Greece confront terrible living conditions. Refugees and undocumented immigrants that arrive at the Greek islands are detained for days in overcrowded cells. Whole families have to sleep in parks, even in cold weather. Moreover, the procedure that a refugee had to follow in order to even apply for an asylum takes too long, or it is being stalled by Greek authorities.
Syrian refugees who manage to get to Greece have to face the hostility and brutality of Greek authorities in addition to the dangerous attempt to even leave their country. Greek police and coast guard officers have been involved in many cases of ill-treatment and illegal-pushbacks of refugees, mainly Syrians intercepted along the Greek-Turkish border.