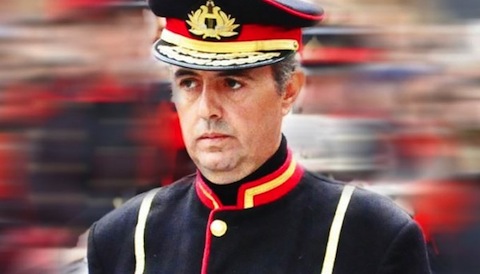 The conductor of the local philharmonic orchestra of Chios Municipality, Greece, Stergios Neamonitakis, killed himself with a gun. The unfortunate incident took place yesterday.
According to local police authorities, the victim, in an attempt to isolate himself from others, went to the basement where the philharmonic orchestra rehearses and ended his life.
The body of the victim was found by some of his friends that were searching for him Sunday afternoon.  Despite the fact that they tried to reach him on the phone many times, Neamonitakis did not answer the calls, something that caused suspicion among his relatives and friends.
A member of Chios’ philharmonic orchestra, Mr. Tetteris, reported on the website Politischios.gr that, “They called me on the phone because I had the keys for the building. So when I reached the spot, the door was shut. We were knocking at the door with no answer. We had no other choice but to break the door down.”
“As soon as we broke the door down we saw the body of Stergios lying down on the floor of the basement.  Next to him, there was the hunting rifle that he used to kill himself by shooting his head. There was blood everywhere,” stated a shocked municipality employee that, along with Mr. Tetteris, found the body of the victim.
No hope was left in his suicide note that would explain the reasons which led him to the decision of putting an end to his life. In the note, he only wished happy holidays to all and gave some guidelines towards the function of the philharmonic orchestra.

The Unexpected Reason the Greek Island of Amorgos was Trending