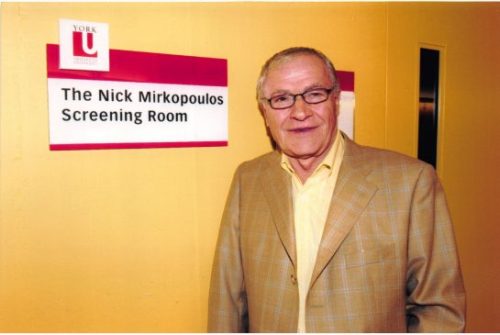 Greek businessman Nick Mirkopoulos did not get the chance to realize his dreams as he suddenly passed away. His plans were to build one of the largest film and television studios in Greece.

The business world as well as Greece seems destitute after the sudden death of the “Mister Cinema,” as they used to call him in Canada. Nick Mirkopoulos’ origins were from Kastoria, Northern Greece. He left the country in 1967 to seek a better life in Canada. At first, he worked as an electrician-contractor in Canadian airports. Later, along with his brothers, he decided to build things that others wouldn’t even dare to imagine. Armed with persistence, toughness and a lot of hard work, they managed to achieve great things.

He had battled a terminal illness in recent months and traveled back to Greece on November 23 to be with his family in his home and birthplace in Kalohori, Kastoria.

Nick Mirkopoulos, as he became known in the business world, was the owner of the “Cine Space Film Studios Toronto” and the “Cine Space Chicago,” which is one of the biggest film, tv, and commercial production studios, cooperating with major Hollywood companies such as “Paramount Pictures,” “Fox,” “Walt Disney,” “Warner Bros” and many others. It is also worth mentioning that Forbes magazine has included the Mirkopoulos brothers on its list of greatest and most significant businessmen in Canada.

The family never forgot their Greek roots which motivated them to create a Music Department, a Cinema Department and a seat of Greek Studies at the University of Toronto and the York University.

Unfortunately, Nick Mirkopoulos suffered a heart attack and passed away before he had the chance to make his dream of building a studio in Greece come true. According to people close to him, Nick Mirkopoulos was expected to visit Greece early in 2014 in order to inspect the places where the studios would be established. Although Nick Mirkopoulos will not be able to complete his work, perhaps his family — knowing how much he wanted to help his country — will continue the project in his memory.