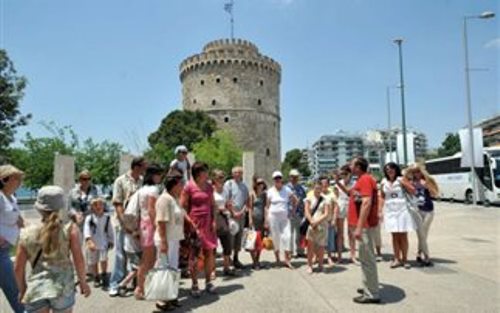 Greece took fourth place worldwide this year regarding the increase of incomes during the first nine months of 2013.
Moreover, Greece is among the elite of 25 countries with the most revenues in 2013. A survey by the World Tourism Organization (WTO) shows that international tourist arrivals have increased by five percent from January to September 2013. Meanwhile, the arrivals have been increased by 41 million compared to the same period last year. The total number of tourists around the world reached 845 million, which is an all-time record.
Europe became the most visited area by tourists and increased by six percent, while central and Eastern Europe reached over seven percent. The WCO maintains that this increase significantly exceeded the initial estimates for 2013.
Asia and the Pacific continue to move too vigorously, recording an increase of six percent, which is enhanced by the increase of 12 percent in Southeast Asia.
Africa received an increase of five percent, fueled by a recovery in North Africa, while international arrivals in the Middle East remained almost stable to +0.3 percent.
The positive trend in international tourist arrivals is also reflected in tourism receipts. Among the 25 countries received, double-digit growth rates of revenues from tourism in the top ten are: U.S. (+11 %), Macao (+10 %) , UK (+18 %) , Thailand (+ 28%) , Hong Kong (+21 %), Turkey (+13 %) , India (+13 %), Japan (+23 %) , Greece (+15 %) and Taiwan (+12 %).
Among the top ten markets for outbound tourism, the Russian Federation led global growth, expenditure on travel abroad of Russian tourists to reach up to 29 percent during the first nine months of the year. Russia has now become the 12th largest market for outbound tourism from 2000, and the fifth since 2012, with expenditures over $43 billion.
China became the first country in numbers of outbound tourists last year who spent $102 billion and continued in 2013 to increase touristic flows to 22 percent in nine months. There is a small increase in costs recorded even to markets: Canada (+3 %) , U.S. (2 %) , United Kingdom (+2 %) and France (+2 %), while Germany remained stagnant, and Japan, Australia and Italy recorded reduced spending.
The Secretary General of the WCO Taleb Rifai stated, “The international touristic flows continues to rise over to average expectations and to support the economic growth in both advanced and emerging economies, firmly supports the effort to create new jobs, to develop GDP and balance of payments. It is really encouraging to see strong results in many European destinations where the tourism industry is one of the driving forces of economic recovery.”
It is also noticeable that the World Tourism Organization estimates international tourist arrivals will increase to 3.3 percent annually, rising to 1.8 million by 2030.