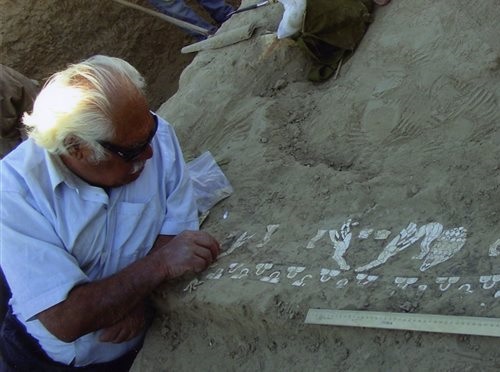 Eminent archeologist of Pontian-Greek origin Victor Sarigiannidis passed away early Monday morning in Moscow at the age of 84. Sarigiannidis was  known for discovering a slew of Ancient Greek cities, temples and ruins.

He was born on September 23, 1929 in Tashkent (Uzbekistan) to Greek parents. In 1952, he graduated from the State University of Central Asia (Tashkent) and in 1961, he received a Master of Archaeology and Middle Eastern Studies from the Institute of Archaeology in Moscow. In 1975, he was named Doctor of Historical Science of the Russian Academy of Sciences. Since 1955, he had been working at the Institute of Archaeology of the Russian Academy of Sciences (Moscow). He was an honorary member of the Greek Anthropological Association, a member of the American Society of Sciences and the Federation of Journalists in Russia.

He began his excavations in Central Asia and Afghanistan in 1949, and during his career he discovered many unknown civilizations and recorded the spread of Hellenic civilization and culture prior to Alexander the Great’s expedition. Among his most important findings are six undisturbed tombs at Tillya Tepe from first century AD, and the ancient ruins of the Bronze Age Kingdom of Margiana of the third century BC.

Sarigiannidis was honored with the title of the Ambassador of Hellenism in 1998, and received an honorary title from the University of Ioannina in 2000. He was also honored with the Gold Cross of the Order of Merit of the Greek Republic in 2002 and the High Distinction of Turkmenistan in 2001.

He wrote 20 books in Russian, which have been translated to English, German, Japanese and Greek. More than 200 of his articles have been published in international scientific journals.