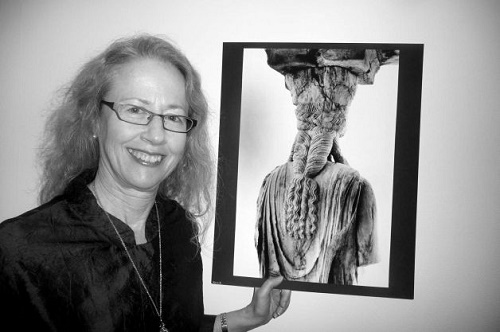 The Greek Consulate General in New York announced the opening of a new exhibition entitled “An Archaeologist’s Eye: The Parthenon Drawings of Katherine A. Schwab.”

According to the press release, the drawing exhibition “combines art, history, and archaeology to powerful effect. The Fairfield University Professor of Art History provides a glimpse into a world once inhabited by ancient Greece.”

Katherine A. Schwab is a Professor of Art History in the Department of Visual and Performing Arts and curator of the Plaster Cast Collection in the Bellarmine Museum of Art at Fairfield University. She is a member of the Managing Committee of the American School of Classical Studies at Athens. Gray-scale scans of Schwab’s metope drawings are on permanent display in the Acropolis Museum in Athens, Greece.

In 2005, she began experimenting with graphite and pastel on paper in an effort to develop a new method for recording her research on the badly deteriorated ancient Parthenon metope sculptures in Greece. She found that careful drawing enabled her to make new observations and scholarly discoveries, which have in turn, contributed to the larger understanding of the east and north metope series. Through these drawings, the Parthenon metopes are being re-imagined in our time. The sustained narrative of the earth-born Giants defeated by the Olympian Gods and the Sacking of Troy are recreated within each viewing, compelling the viewer to re-envision the elusive image.

The exhibition opens to the public at the Greek Consulate General in New York on January 16, 2014, and will be on view there until February 13, 2014. It will then tour nationally through 2017.