The Bus That Spreads Entrepreneurship Around Greece 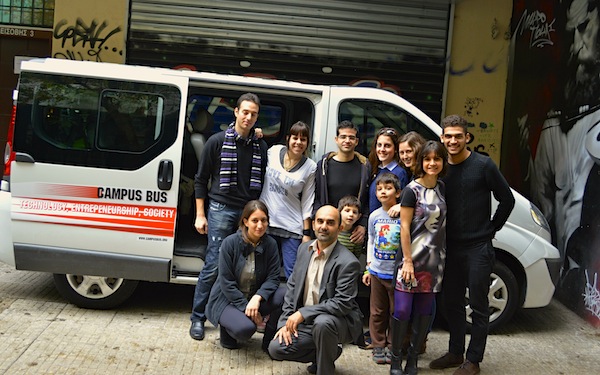 CampusBus is a five month campaign promoting entrepreneurship, business skills and a “startup mentality” all around Greece. The project is delivered through a training team travelling on a bus around Greece, setting up week-long training camps in larger towns and cities.
The Training Part
Arriving in a town or large village, CampusBus sets up and delivers its program to locals in order to create and leave behind at least one local volunteer community curator. The latter will remain in a coordinating role, measuring and reporting progress of attendees, helping with networking and proposing future candidates for future visits.
Trainers conduct workshops focused around business skills improvement and youth employment. One main goal of the CampusBus project is to leave behind an energized and inspired group of people who have the skills (or are developing them) for business success.
The “After-CampusBus” Period
The people who participate in the training project will continue to engage with the CampusBus community as it grows and seed the Greek entrepreneurial landscape as they start businesses. Also important is to support other startup companies or individuals to develop their skills as well.
Emphasis on Women!
CampusBus organizers will also give particular emphasis on reaching out to women, a hard hit demographic in terms of unemployment. 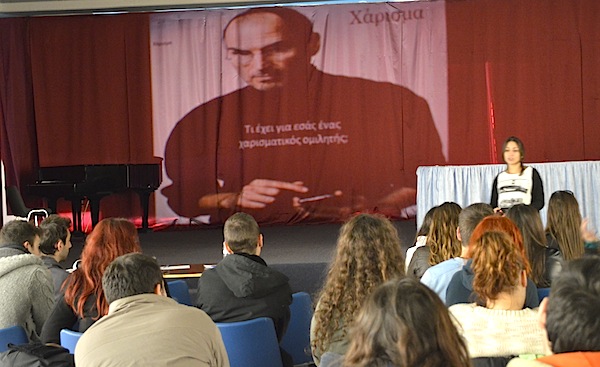 Who is Who
Organizing Team Members
Stavros Messinis – Team Leader: Stavros is a member of Startup Weekend’s Global Facilitators team, having run events in Germany, Saudi Arabia, Moldova and Cyprus. He has been involved in Startup Weekend Greece since 2008. He founded his first company coLab Workspace at Startup Weekend 2009 and has since co-organized a number of local and international events. Most recently, Stavros was the MC at the European Pirate Summit and is currently focusing on his latest venture, Greece’s newest and largest co-working space called The Cube.
Maria Calafatis – Team Manager: Maria was a community curator at coLab@AIT and has since become a community curator of FoundersMeal.com. She continues now with her new position as a curator/manager at The Cube Athens, and is also running CodoDojo Athens, a free coding club aimed at young children ages 8 to 12.
Anastasia Ktena – Team Member: Anastasia is a student of the Department of Communication, Media and Culture at Panteion University Athens. Her specialization is Public Relations and Advertising. Anastasia has quite some years of experience in the sales and promotion field due to her involvement in tourist businesses. She is currently involved with the CampusBus project as an organizer and trainer supervisor.
Stavroula Skoufi – Team Member: Stavroula has recently graduated from the National and Kapodistrian University of Athens with a degree in Primary Education. She has taken up a second degree in Business Administration at Athens University of Economics and Business. Stavroula is currently involved with the CampusBus project as an organizer and communication manager.
The Trainers
Stamatis Markoglou – Trainer Leader: A student at Athens University of Economics and Business in the Marketing and Communications department. The last two years, he has volunteered in projects related to Marketing, teamwork and reactivity. He has been a facilitator in Greece, Egypt, Morocco and Albania. He is the trainer of the Marketing Workshop for the CampusBus Project as well as the leader of the trainer team.
Penny Sapouni: Studies Economics in the Business and Economics University of Athens. She is in charge of delivering the ”Presentation Skills and the Basics Rules of a Job Interview ” workshop at the CampusBus project.
Georgia Kapralou: A student at the Athens University of Economics and Business in the Business Administration Department. She is a TEDxster, an AIESECer, a volunteer and her passion is the organization of events (conferences, festivals). She presents the Management Workshop.
Konstantinos Stavgianoudakis: Konstantinos graduated from Panteion University with a degree in Economic and Regional Development. His professional career is based on financial markets, specifically in the foreign exchange market, as a trader/technical analyst and account manager. He is working for the CampusBus project as a trainer on the subject of Entrepreneurship.
Ioannis Rizos: A senior student at the University of Piraeus in the Department of Statistical Insurance. He is a trainer in the CampusBus Project and is in charge of delivering the workshop on “Using Massive Open Online Courses – Moocs.”
*Greek Reporter is a proud CampusBus media sponsor