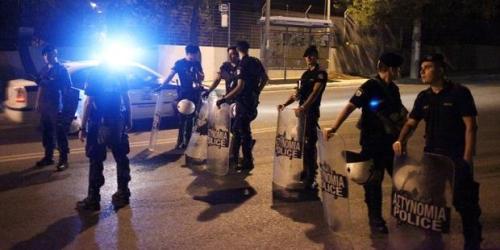 Amnesty International has called on the Greek government to investigate allegations that the Greek Chief of Police advised officers that undocumented immigrants should be detained for as long as possible, and their “lives made unbearable.” This was part of a related announcement posted on the organization’s website yesterday.
The alleged comments were made during a meeting of police officials, reported Hot Doc magazine. The police chief is alleged to have said, “If they told me I could go to a country …, and would be detained for three months and then would be free to steal and rob, to do whatever you want… that is great.” He continued “We aim to increase the detention period ….we increased it to eighteen months…for what purpose? We must make their lives unbearable…” Hot Doc magazine also included an audio of the comments by the Police Chief.
John Dalhuisen, Amnesty International’s Director for Europe and Central Asia stated that, “If accurate, the deeply shocking statements attributed today to the Greek Chief of Police would expose a willful disregard for the rights and welfare of refugees and migrants seeking shelter and opportunity in the European Union.” He underlined that “the Greek authorities must establish whether these remarks were made and take appropriate action to ensure that Greek law enforcement officials uphold the law and protect the rights of migrants.”
He also posted the following comments on the official Amnesty International website, “In a context where the Greek police have come under increasing scrutiny for alleged ties to the far right party Golden Dawn, these reported remarks from Greece’s most senior law enforcement official cannot be swept under carpet. Confidence in the integrity of the Greek police requires a thorough and independent investigation into the authenticity of these remarks.”
Amnesty International reported last week, how Greek police and coast guard officers have been involved in many cases of ill-treatment and illegal-push-backs of refugees, mainly Syrians intercepted along the Greek-Turkish border. Amnesty International has also highlighted many instances of, “appalling conditions of detention in centers for irregular migrants and asylum-seekers.”

Greece restricted movement to within 2 kilometers (1.2 miles) radius from home on Thursday in a new effort to stem the spread of the coronavirus.
Greece