Greek Journalist Pens New Novel Based on Murders She Solved 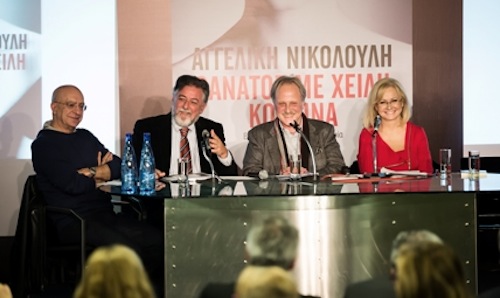 Angeliki Nikolouli, the well-known Greek journalist presented her second novel “Death by Red Lips (Thanatos me xeili kokkina)” recently in Athens.  Her first novel “I Dreamed about your Murderer,” was a great success and inspired here to put pen to paper again. Her publishers “Kastaniotis,” along with the Metropolitan College presented her new book during a well attended event with guests including Elias Mamalakis, Nikos Dendias, Johnny Kalimeris, Annita Pania, Katerina Panagopoulou, Giannis Panousis and Panos Kokkinopoulos, among many others.
The story revolves around a black widow (with red lips) who has destroyed many people in her life, mainly the men who are attracted to her. On a cold winter’s night in a deserted village, a woman commits a terrible crime. Years later during Christmas in Athens, a journalist gets a midnight call from a lawyer asking for her help in locating a young entrepreneur who has gone missing. The search begins and the two stories intertwine to become one. The main characters are part of a deathly game were anything goes.
The book was also presented in Thessaloniki on the 20th of December in the Aristotelis Hall of the Makedonia Palace Hotel.
Watch below a visual representation of the book that Angeliki’s son, director Konstantinos Mousoulis, filmed about the novel:

You can order the book here.