Ruins of Zakynthos are a Natural Phenomenon 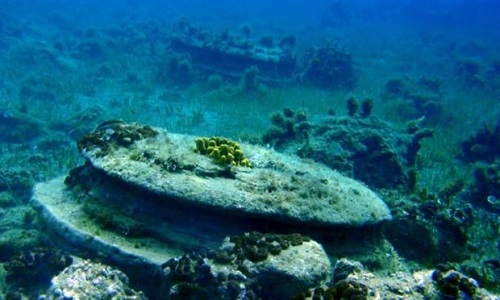 It turns out that what scientists thought were the ruins of an ancient city in the gulf of Alykanas in Zakynthos, Greece, was in fact the result of a rare natural geological phenomenon that took place at least 5,000 years ago.
A study was published on Wednesday conducted by Dr. Michael Stamatakis, archeologist Magdalene Athanasoula, and technical expert Petros Tsampourakis, indicating that the findings were not in fact man-made. However there was no evidence of a similar geological phenomenon occurring elsewhere, so Dr. Stamatakis, who has been studying the island’s geology, is trying to find out what the origin could be.
The chemical and mineralogical test showed high levels of magnesium, calcium and iron carbonates, which are usually found around vents in loose deposits of aluminosilicate.
Deputy Mayor of Zakynthos Akis Ladikos mentioned that this phenomenon is unique to the world, so the scientists must conduct more test in order to provide further details. He also noted that he expects this to direct more scientific, and of course tourist, interest towards the Greek island.