Greek Myths That Have a Religious Background 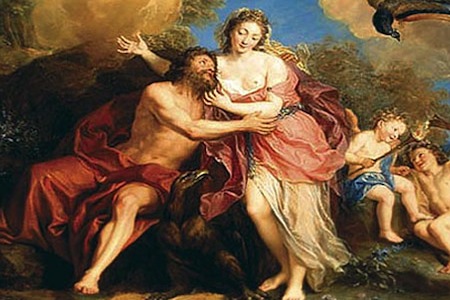 by Lauren DeVoe, Demand Media
All Greek myths are religious. These myths were stories about the various gods and heroes that accounted for the creation of the world, the seasonal cycles and other natural phenomena. There are several types of myths found within Greek mythology that are worth noting religiously and culturally.
MYTHS OF ORIGIN
Origin myths explain how the world was created. In “The Theogony,” Hesiod, one of Greece’s earliest poets, explains that out of chaos came Gaia the earth. Gaia and her husband Uranus had children, a race called the titans. Though powerful, the titans were eventually overthrown by Zeus and the rest of the gods whom the Greeks worshiped. Origin myths also told Greeks how to worship their gods. Regarding Zeus, Pausanias wrote: “There are statues of Zeus, one made by Leokhares and one called Polieus, of the City…Upon the altar of Zeus Polieus they place barley mixed with wheat and leave it unguarded.”
MYTHS OF THE AGES
Myths of the ages of history assist in establishing the social order of a society. According to a Greek myth, the Trojan war ended the mythic age and brought mankind into the modern era. It was important for the Greek people to understand the social order of their world and for the kings to trace their genealogy and dynasties. The myth of Io, who was turned into a cow and forced by Hera to wander to Egypt, explains how her descendents later established the royal houses of Thebes and Argos. The myths of ages ensured that Greek culture knew that their leaders were connected to the gods.
SEASONAL RENEWAL
Myths also helped explain the natural phenomena of the Greek world. One of the most famous seasonal renewal myths is the story of Persephone’s kidnapping by Hades. Also found in Hesiod’s “Theogony,” the Hymn to Demeter tells about the goddess Demeter, Persephone’s mother, and her search for Persephone. Demeter’s search caused a great famine on earth while she was searching. The Greeks use this myth to explain why there are four seasons and how humanity learned agriculture.
MYTHS OF HEROES
Myths of heroes show how human institutions were created. To many people today, these are simply stories of great feats or acts, but to the culture that believed in these stories, everything had significance. The myth of Pelops explains the creation of the Olympic games. The story of Pandora shows the reason why mankind has to deal with suffering and illness. These myths assisted people in coping with the world around them.