Greek Former Minister of Transport Arrested for Driving Without License 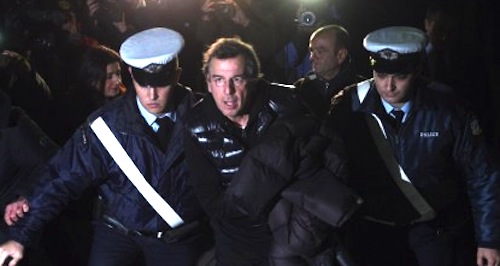 Michalis Liapis, former New Democracy MP as well as former Minister of Transport and nephew of Constantine Karamanlis, was arrested today, in Loutsa. The traffic police stopped him when he violated a stop sign. It was later found that the car — a luxury SUV — had fake plates, using the number of its proper ones, which had already been filed.
Then he reportedly told the police: “I have homemade signs so I can take small rides” leaving everyone speechless.
Furthermore, the former Minister had no driver’s license. All this in addition to the car being uninsured, resulted in the former Minister’s arrest. 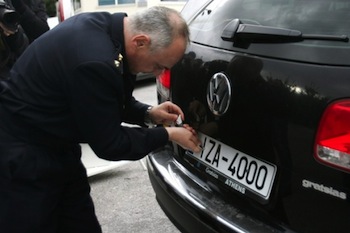 Eventually, Mr. Liapis presented his license as well as his ID card but he is still in custody. At 6pm he will be led to the prosecutor on charges of forgery, false certification and use of an uninsured vehicle. He will also have to pay a fine of 500 euros.
Police said the 62-year-old had handed his license plates over to tax authorities to avoid an estimated 1,320 euros in road tax for 2013, and was illegally using copies of the originals.
According to his wealth declaration for 2011, Liapis and his wife owned 28 pieces of real estate, including a villa with a swimming pool on the resort island of Mykonos. His declared income for that year was 109,000 euros.
Interestingly enough, Michalis Liapis was Minister of Transport in 2007. While he was in office he had ordered the police to give a fine to the former Thessaloniki Prefect, Panagiotis Psomiadis because he allegedly was driving a motorcycle without wearing a helmet.