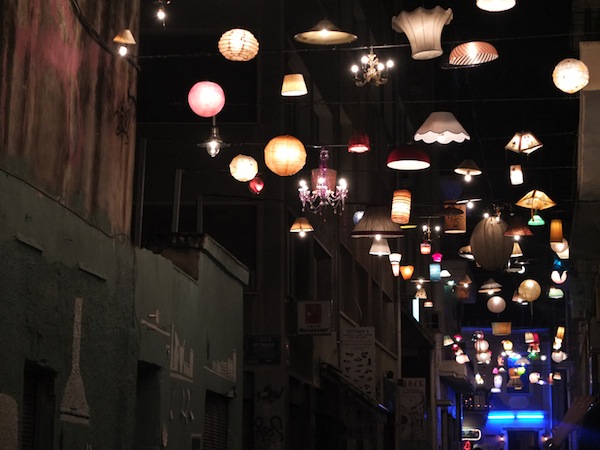 If you spend an evening on Pittaki Street in Athens city center (a small street perpendicular to Ermou), your eyes will most definitely be drawn toward the sky. The old lamps of the real city’s traditional houses hang from one balcony to another — a picture that reminds us of the way in which people used to hang their laundry in old Greek or Italian neighborhoods —  transforming the area and providing an inviting atmosphere, very different to that which existed until recently in this dark alley.

This attraction is a light art project, named Sin- oikia Pittaki and though it seems simple, it took five months to prepare.

What does light art offer to a big city?
Light art is a form of installation art, which began in the U.S. in the mid ’50, with its main medium being light. Consequently, light art can give a different perspective to an area, creating an atmosphere through light that can completely change ones experience of space.
How did the idea of Sin-oikia Pittaki come out?
The concept of the project was to “bring the inside outside.” The old lamps from real houses and the participation of the audience makes it real.
Why did you choose this small street?
Actually we were looking for a dark alley, which would benefit from more abundant and better lighting. Pittaki Street, though it is in the center of Athens in Monastiraki, has had several outbreaks of crime in the recent past.
These old lights were from Athens’ citizens?
Most of the lights were from houses in Athens and some from Thessaloniki. A similar project had been undertaken in Thessaloniki in 2010 in Emprar Street. That’s what our sponsor saw and wanted to recreate here in Athens.
You are all very young. When you began organizing the project Beforelight, did you have other occupations or jobs at the same time?
We still do! We don’t receive income from the group, since it is a non-profit organization. Until the project Sin- oikia Pittaki, we invested money for the Group from our mutual fund.
How many years has Beforelight existed?
Seven years. We met in 2005, when we were students at the Theatre Department of Aristotle University. We teamed up in 2007 and in 2011 officially became a non-profit organization.

Were you paid for the lighting installation of Pittaki Street?
Generally, we are reimbursed for materials and the cost of labor and technical staff. Thankfully for this Sin- oikia we have a great sponsor who saw our work, liked it a lot and has helped enormously. It’s important to note that the project could not have been completed without the support of the Imagine the City team.
How much did it cost?
The cost of this project was about 50,000 euros, including maintenance. We need to remember that the installation has been in Pittaki street for a year!
Who finances similar projects abroad?
In most instances, the finances come from a municipality or a fund. In other countries, many town and city municipalities have their own art commissioner who is responsible for similar projects in urban areas, usually with about two or three per year.

Which parts of Athens would you like to “light up?”
Some really dark streets in the Metaksourgio, Psiri and Botanicos areas.

Are your projects only a matter of aesthetics?
We do aim for a really good and aesthetically pleasing result, but in the end what we are most interested in, is public participation in our projects. The main goal for any project is to change the appearance of the street, either because it was previously too dark, because it was isolated and dangerous, or because it has architectural interest which was previously not visible.
Does it take a long time to prepare a project?
The total duration may be one to ten months. Sin- oikia Pittaki lasted from June to November. As it is classed as a permanent public installation, many licenses and safety assessments were needed. There are many intermediate stages like brainstorming, planning, approval, materials research for the budget, etc.
Do you undertake every job on your own or do you supervise the architectural part?
We have participated in both the organization and installation. Over the years, we try to take the role of supervisor.
Which was your first light art project?
In 2007, the art project Light on Canvas which was held at the Athens Video Art Festival.

Have you worked abroad?
We undertook the lighting installation at the “Night of Museums,” event in Rotterdam. The art project was named Barflight.
What are your sources of inspiration?
The space we see and personal experiences acquired through books, movies, along with other light art artists’ projects as well.
Is there a project that you are especially proud of?
We always disagree on that, although we are all very proud of the light project To Fotistiko sou allios on Emprar street, Thessaloniki and Serial Bulb Killer. The latter was presented as part of the 2nd Thessaloniki Biennial of Contemporary Art, shortly after the murder of Alexis Grigoropoulos. It was a wall of light bulbs which visitors were invited to break with stones. A symbolic act of violence from a safe distance that proved a point and had a meaning. Especially after the murder.
[youtube]x6Cmiqer1R4[/youtube]

PLUS INFO
The group Beforelight consists of nine people. Four Architects, three  Scenographers –Theater Light Designers and a Director of Film & Video.They live in different parts of the world (Greece, Barcelona, Stockholm, the Netherlands and San Fransisco). They arrange weekly online meetings via skype and try to meet as much as possible. Moreover, they prepare educational programs for children, including one at the Eugenides Foundation, along with workshops and participation in international exhibitions and events.