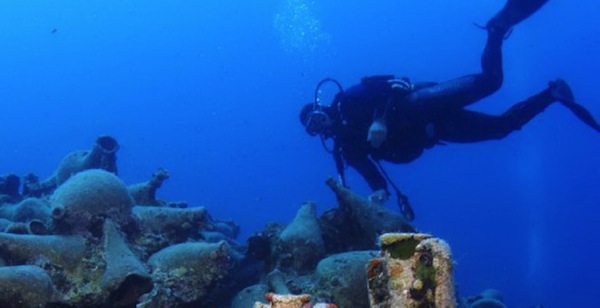 Located near Pylos in the south-western Peloponnese, the two parks will allow visitors to explore ancient shipwrecks and underwater archaeology.
Among the sites are the remains of ancient trading vessels dating to the Roman, Byzantine and medieval periods, discovered by archaeologists around the island of Sapienza. Though the hulls of the ships have long since disintegrated, their cargoes, which include granite pillars from the middle-east, amphorae and stone sarcophagi, can still be found, scattered across the sea bed.
To the north, in the Bay of Navarino are a number of 19th century shipwrecks. These include the remains of three Turkish ships sunk by allied British, Russian and French forces during the Battle of Navarino. The battle, which took place in 1827, was a key engagement in the Greek War of Independence and was the last major naval engagement to be fought entirely with sailing ships.
In addition to underwater archaeology, divers will be able to enjoy the marine life of the Mediterranean. Underwater caves and reefs home to grouper and sea turtles can all be found within the parks, while dolphins are a common sight in Pylos Bay.
According to Marketing Greece, a representative for the Greek tourism industry, the parks are due to be open by the summer of 2014.
(source: wanderlust)