TechNews
GreekReporter.com Diaspora Remembering 70 Years Since the Holocaust in Kalavryta

Remembering 70 Years Since the Holocaust in Kalavryta 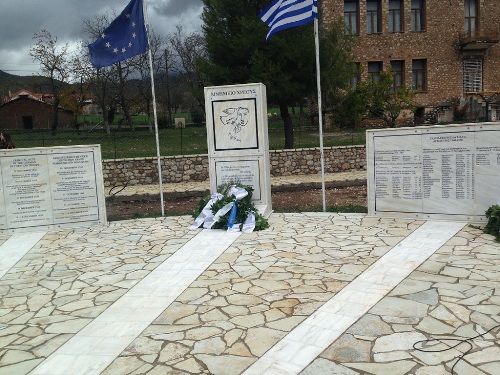 An event in remembrance of 70 years since the holocaust, took place on Saturday morning in Kalavryta, Greece. A memorial service for the victims was held in the metropolitan cathedral of the Assumption of the Virgin Mary in the presence of Ieronymos, Archbishop of Athens and Greece. A procession leading to the place of sacrifice followed, where a memorial prayer was recited and a wreath laid.
The government was represented by the Assistant Minister of Defence, Athanasios Davakis. Other Greek political figures, such as the president of the Independent Greeks political party, Panos Kammenos, deputies of Achaia, and Germany’s Ambassador to Greece, Wolfgang Doltwere were also in attendance.
In his speech, Archbishop Ieronymos mentioned among other things, that “values are conquered with blood and sacrifice,” adding that “the Greeks ought to turn back and remember things they have long forgotten, things attached to our tradition and our history.”
Mr. Kammenos underlined that “the Nazis in Kalavryta in 1943, executed 696 men and children of the area as well as burning down 640 houses.” He continued, “Merkel’s current policy — a policy that the Greek government exercises through heavy taxation — will lead to the seizure of Greek families’ homes and to the impoverishment of the Greek people.”
Many of Kalavryta’s residents and those from neighboring villages were also present for the memorial prayer at the place of the sacrifice. Students from Kalavryta and Patra held banners with slogans for peace and freedom and others against fascism.

Zagori is an awe-inspiring natural landscape with an incredibly well-preserved network of 46 villages and features national parks, rivers and waterfalls.
Business