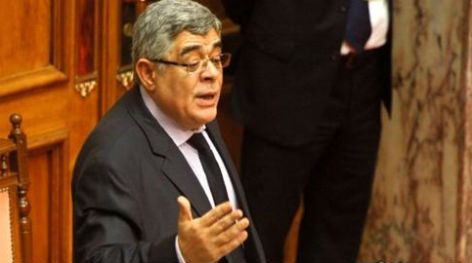 A new video has gone public, showing Golden Dawn’s first in charge, Nikos Michaloliakos, commenting on some Metropolitans of the Greek Orthodox Church in particular. This video was among those that were seized by anti-terrorism officers, from the personal computers that were in the homes of the Golden Dawn’s chief, as well as of some Golden Dawn MPs. These documents are in the hands of the two investigating magistrates, Ioanna Klapa and Maria Dimitropoulou.
The video shows Nikos Michaloliakos — who is in pre-trial custody — referring to Metropolitans of the Greek Orthodox Church  who support the Neo-Nazi party. In another part of the video, Michaloliakos also comments on the elections of the new Archbishop back in 2008.
Golden Dawn’s chief makes rather disrespectful comments about the clerics of the Greek Church in general. In the video he characterizes them as “corrupted clerics” and in addition he expresses his views regarding Islam and Judaism.
“The Metropolitans that are worth being on good terms with,” according to Michaloliakos, are Metropolitan Seraphim of Piraeus (because he has a solid character), Metropolitan Efstathios of Sparta as “he welcomed the lads of our local organization in Sparta and persuaded a whole nursing home to vote in favor of Golden Dawn in the recent parliamentary elections.” He also praises the Metropolitan Andreas of  Dryinoupolis, Pogoniani and Konitsa “who subsidizes the local offices of Golden Dawn.” During the video he makes it crystal clear that he has a poor opinion of the Metropolitan of Thessaloniki Anthimos, because “if it wasn’t for Anthimos, Metropolitan Efstathios would have been elected as Greece’s Archbishop back in 2008 instead of Ieronymos. Anthimos is a hypocrite” Golden Dawn’s chief added.
This video along with the comments of Michaloliakos has caused significant reaction within the Greek Orthodox Church, mainly from those Metropolitans that Michaloliakos makes reference to.
In an earlier statement, the Metropolitan Seraphim denied any connection with Golden Dawn and reminded people, that in a text he wrote in September 2013, he criticized Golden Dawn’s actions as against what Christianity stands for, and also stated that their members are pagans.