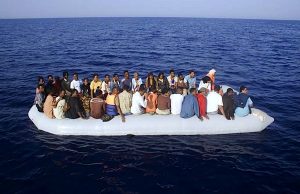 According to an Amnesty International report published on Friday, entitled “An international failure: the Syrian refugee crisis,” Greek and Bulgarian authorities are accused of “deplorable treatment” of Syrian refugees. The report mentions “life threatening push-back operations along the Greek coast, and detention for weeks in poor conditions in Bulgaria.”
Refugees reported that Greek police and coastguard officers beat them, took their belongings away and pushed them back to Turkey.
A 32-year-old Syrian man described the way in which he, and a group of 30 refugees including his mother, were treated by the Greek coastguard near the Greek island of Samos in October. “They made the men lie in the boat, they stepped on us and then hit us with their weapons for three hours,” he said. ” The next morning they put us back on our boat, towed us back out and left us in the middle of the sea.” he said.
Amnesty International’s report highlights the inability of the European Union to deal with immigration issues, noting that over the past two years, 228 million euros was provided for border controls while only 12 million euros was allocated to Greece for supporting immigrants.
Amnesty International (commonly known as Amnesty and AI) is a non governmental organisation focused on human rights. The objective of the organisation is to conduct research and  prevent the abuse of human rights.

The first-ever written exam for Greek citizenship is scheduled for May 16, 2021, according to an announcement from the Interior Ministry.
Read more
Crime

A Greek student in the Italian city of Turin has sustained serious injuries after her former boyfriend stabbed her in the neck and chest.
Read more
Greece

Turkey charged on Tuesday that Greek fighter jets had “harassed” its research vessel Cesme while it sailed in the Northern Aegean.
Read more