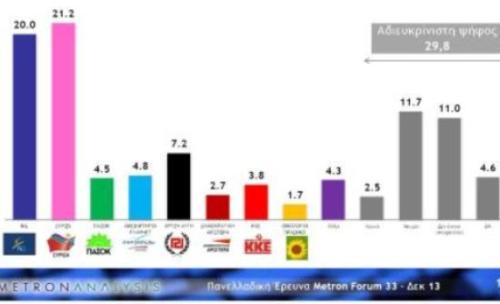 A Metron Analysis opinion poll carried out on behalf of the newspaper “Avgi,” gives SYRIZA a 1.2 percent lead over New Democracy. Golden Dawn seems to be stable in third position with 7.2 percent, while the Democratic Left is below 3 percent which is the threshold needed to be in parliament.
In particular, the opinion poll places SYRIZA first with 21.2 percent. Second is New Democracy with 20 percent, followed by neo-Nazi party Golden Dawn in third place with 7.2 percent. The Independent Greeks party (ANEL) is fourth with 4.8 percent while PASOK is in fifth with 4.5 percent. Right behind the coalition party is the Greek Communist Party (KKE). DIMAR has just 2.7 percent and would therefore in theory be out of Parliament.
On the issue of who would be most suitable for the position of prime minister, coalition leader and current Greek Prime Minister Antonis Samaras received 23 percent of votes from those who participated in the poll, followed by SYRIZA chief, Alexis Tsipras, with 19 percent.
In terms of the popularity of political leaders, Alexis Tsipras came first, receiving 37 percent of votes. Antonis Samaras came second with 29 percent, followed by the leader of DIMAR, Fotis Kouvelis with 28 percent. In fourth place was Panos Kammenos with 27 percent, followed in fifth by the General Secretary of The Communist Party, Dimitris Koutsoubas with 19 percent.