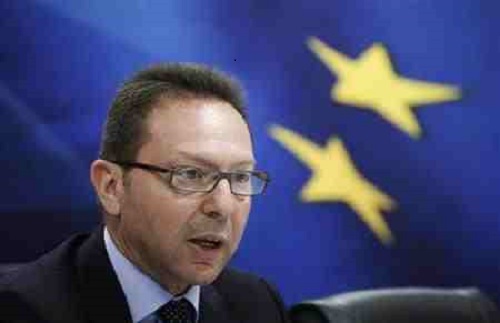 After the meeting between the Heads of the Ministry of Finance and Troika representatives, a government official mentioned that the Greek government, along with Troika, is attempting to close as many open subjects as possible until the beginning of January.

Shortly before 8pm, the meeting between the Greek Ministers of Finance and Development, Giannis Stournaras and Kostis Chatzidakis, with the foreclosure inspectors was completed as well. Meanwhile, a little later Mr. Stournaras was transferred at Maximos Mansion where his plans were to inform the Greek Prime Minister about the points made in today’s crucial meetings.
According to a senior official at the Ministry of Finance, the main issue that was discussed during the meeting with Troika was the Single Real Estate Property Tax bill.
“They are currently examining the new data we provided them with,” said the same source, stating that tomorrow the bill may be submitted for approval by the Parliament.
Some legal drafting improvements may also be incorporated in this particular bill, such as: transaction tax at the Athens Stock Exchange, regulations concerning the EFSF, the recapitalization of banks and the Financial Council (i.e. an independent body to monitor the state budget).